I ended up doing both yesterday.  Both canning and freezing the meat sauce for spaghetti.  I sextupled the meat and octupled everything else.

And apparently octupled is an actual word.

I octupled and sextupled because I was concerned that my usual sextupled recipe wouldn't yield enough for a full canner load plus supper.  Also?  This sauce is very meaty--it could stand a little more sauciness.

Turns out I was wrong about the yield (I blame the head space), which is why I ended up doing both.  I canned a full load (which is five, in my "little" canner) of quarts, and had enough left over to freeze another two quarts, as well as having enough for our evening meal and a little left over from that.  I did think about doing a second, partial load, or canning some in half-pints or pints for AKD, so he wouldn't have to open a whole quart when he got the hankering for spaghetti, but decided freezing would be both easier and less time consuming. 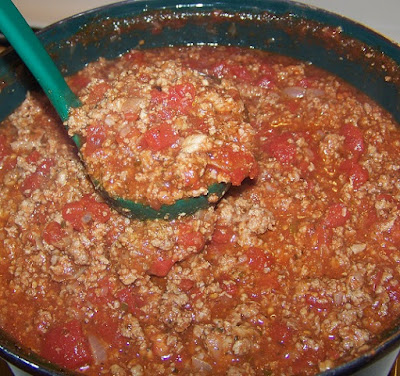 So...we're all set for spaghetti sauce around here for a while.  I seriously love cooking once and getting eight meals for my trouble.  The fact that most of it is self-stable is an added bonus.

If you'd like to can some spaghetti sauce too, just sextuple or octuple or however-many-tuples-you-want the recipe.  Pack in hot jars and pressure can at 10 pounds of pressure: pints for 60 minutes or quarts for 75 minutes.
Posted by Scarlet Bluefield at 11:15 AM