My Husband Gave Me Cheap Vodka for Valentine's Day

My husband gave me cheap vodka for Valentine's day.  Because nothing says, "I love you," like almost a gallon of cheap vodka. 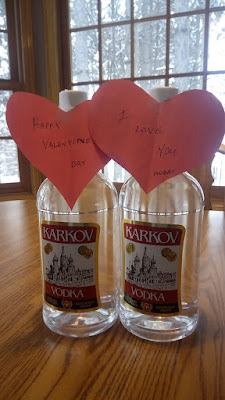 Several weeks ago, he noticed that I had cheap vodka listed as a possible gift idea for me on our family's gift website.  He thought that was kind of strange, since I don't like alcohol, and I drink alcohol very infrequently.  I actually can't remember the last time I had a drink, I mean, aside from the sips I take of Hubby's beers every now and then to confirm that I still don't like it.

Near the beginning of February, he asked if I would like a gift for Valentine's day.  When I replied in the affirmative, he asked what, and I said vodka. 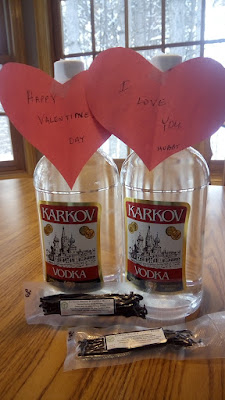 I'd already purchased the vanilla beans, you see.  And considering my underbuying tendency, and my hatred of shopping in general, I was dreading having to make another stop to buy alcohol (where we live, alcohol has to be sold in separate liquor stores--you won't find it in the grocery store, although pretty much every grocery store around has a liquor store right next to it.  It's still another stop, in my mind, anyway).

So Hubby bought vodka for me.  And that was the perfect way for him to show that he loves me, since my main love language is acts of service.  I love it when he puts gas in the vehicles, too.  I pretty easy to please, actually. 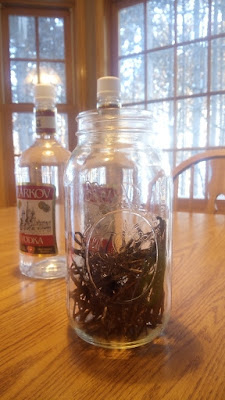 You know what this means, right?  Yup.  I got the vanilla extract started last week.  It'll be ready in...oh, 4-6 months.  Or longer.  I mean, the longer it sits, the better it tastes, or so I've been told.

Apparently, Hubby was chatting with the senior high youth at our church about where he should buy cheap vodka.  Well, I think he was actually chatting with some of the leaders, but the kids happened to be there.  Because when I posted on Facebook that my husband had purchased cheap vodka for me for Valentine's day, both the minister to families with students and one of our pastors commented on the post, saying things like it was fun listening to the liters to quarts conversion, and oh, so that's what he was talking about.  With impressionable minors.  At least it was educational? 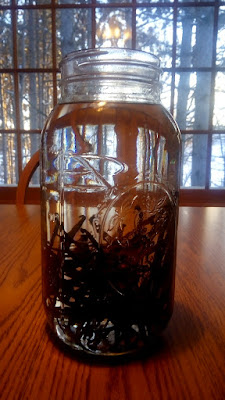 On Sunday, our pastor asked me if I was going to blog about it.  Yes.  Yes, I am.  I'll check back in in a few months.

If you've been paying attention, you'll know that making vanilla extract was on my 9 for 2019 list.  Whoo hoo!  I'm well on my way to accomplishing  my goals.  Also, passive goals, like this one, are awesome.

For those of you wondering about particulars (there is a lot of varying and contradicting information online about the appropriate vanilla bean to alcohol ratio), I used 40 of these extract grade vanilla beans (the price has gone up since I bought mine, but I liked this seller, because he had the best price at the time, shipped quickly, and included a sample of whole cloves with my order) and 1.75 liters of cheap vodka.

Email ThisBlogThis!Share to TwitterShare to FacebookShare to Pinterest
Labels: 19for2019, 9for2019