I've seen a lot of social media posts in the past couple of days saying that people's animals are confused because of us humans changing our clocks.  The animals are not confused.  They're just keeping on, using the sun to tell them when to wake up and when to go to sleep, unlike us poor humans.  We're the confused ones.  It's not like our animals have somewhere to be at a specific time.  They're not watching the clock.  They don't care that now MC is heading out to the bus stop in the dark again.

I remember my first beginning-of-daylight-savings-time as a mama.  A couple days after we sprang forward, I was talking with a couple of other new mamas, and one of them asked me if the time change had messed AKD up.  No, it hadn't.  He was still waking up at the same time as always, only now we were calling it 5:30 a.m. instead of 6:30.  It didn't mess him up, but it kinda messed me up.

Even though I'm tired, I have to admit that I'm enjoying the fact that the sun has been at a lower angle when I've gone out to read to the chickens in the morning the past couple of days.  There's something so joyful about the sun being in my eyes.  In that place and at that time of day, anyway.

Speaking of chickens, the Littles had a birthday!  Or hatchday, I guess.  Last week.  Hazel, Indigo, and Koko, at a year old, are officially hens.

We celebrated by having extended free range time, which wasn't really all that free because there was snow on the ground and there's a huge snow dam around the coop, which means they didn't have much more room than they have in their enclosed, snow-free run.  I also fed them cookies, which were kinda yummy.  And I gave them a gift--freeze dried black soldier fly larva.  Yum!

The girls have picked up their egg-laying, and now we're getting 3-5 eggs daily from 6 hens.  A week or so ago everyone laid an egg on the same day.  So I made a flower.

And then I put them in an egg carton.  And I had to take another picture. 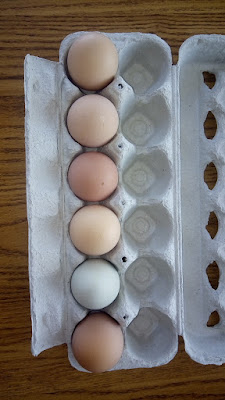 Pretty, right?  I'm thinking my pickled eggs will be in process sooner than I anticipated.  Yay!
Posted by Scarlet Bluefield at 5:00 AM