Menu plan for the week of March 25

Last week was "spring" break here, and I must say, it does feel pretty spring-like.  It rained for three days week before last, which meant we lost a lot of snow.  It also means we're wallowing in mud.  We had standing water in the chicken run.  It's merely soggy now, instead of straight-out wet (thanks to a week or so of not-rain, and judicious application of shredded aspen), but I'm pretty sure one of the girls' food bowls in buried in muck, possibly never to be seen again.  I kept seeing pictures of friends in warm, sunny, non-muddy places, and I'm just over here, wearing my chicken boots, trying to keep my chickens from being swallowed by the muddy abyss.

In my continuing quest to use up pantry and fridge items that are open, but are not ingredients used in our regular recipes, on Saturday, I made Cheerio Treats.  I used up three separate open packages of marshmallows, and that still wasn't quite as much as the recipe calls for, but no way was I going to open one of the two unopened packages in our cupboard, lest I need to find another way to use those.  My go-to when using up dry or sticky marshmallows is rice krispie treats, but in the spirit of not buying anything new that will then, in turn, need to be used up, I went with honey nut cheerios instead--although I have been thinking about making clif bars lately, so I might be buying rice krispies anyway. 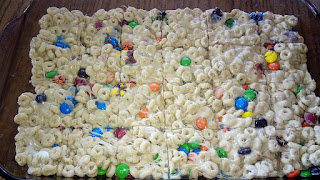 The remainder of the 2011 barley ended up being just a tiny bit over the 2/3 c. called for in the Beef Barley soup recipe, so, as promised, I threw it all in.  Unfortunately (or fortunately, depending on how you feel about these things), Hubby and I really liked the soup, and I think AKD would, too, so there might be barley in our cupboard again soon.

This week, I'm making Italian sausage and white bean skillet to use up a can of beans that my sis gave me.  The recipe also calls for spinach, which I just happen to have in my freezer, leftover from another recipe a couple of months ago, and I'm planning to cook the little bit of penne pasta I have left in an open box to serve with it.  I'm also using up an open bottle of salsa verde on Thursday, and I found 3 candy canes in the cupboard, which will be going into cookies this week.

I also found cans of evaporated milk and sweetened condensed milk, and a jar of turkey gravy in the cupboard.  Any ideas?