I need a Cricut

Ever since I made my chicken sign, I've been plotting and dreaming about the next wooden sign I was going to make. 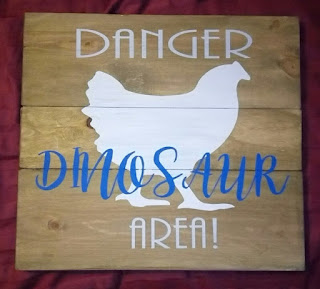 I had three in mind, of varying complicatedness.  One was quite simple--just two words, and I figured I would use the same technique that I used on these mugs to make that one.


Another was pretty complicated--ten words, each in a different font--and I figured I would make that one at a workshop, like I did the chicken sign.  Paying someone to make the stencil and put the sign together for me, and provide all the paint, would be totally worthwhile.  The other was moderately complicated, but it wasn't worth it to me to pay for another workshop to make.

And then, my life changed.

You know how sometimes you'll have a revelation, or gain an insight, and suddenly everything is different?  Like there's the time before, and then there's the time after, and nothing is ever the same after that?

I found out our library has a Cricut available for patron use.

It was life changing, this knowledge.

The Cricut is a cutting machine.  It can cut all sorts of materials, including paper, craft foam, metal, and vinyl.  I guess it can even cut fabric and craft wood.  There are other brands of machine that do the same thing, but Cricut seems to be the most popular, and after a bit of research I've discovered it's the most user-friendly as well.  And one of the things Cricut cuts is self-adhesive vinyl and stencil material.  Which means that suddenly, I can make whatever I want as often as I want with stencils and self-adhesive vinyl.

This is the first thing I made:

I had to make my own trophy*.  Which is completely OK, because I GOT TO USE THE CRICUT FOR THE FIRST TIME.  It was easy and fun.  And easy. And fun.

And I am hooked.  Seriously.  There are so many crafty thoughts pinging around in my brain right now.  I started designing the stencil for my pretty complicated wood sign--I think I have it how I want it now, and I will definitely show you when it's done.  I have another word all set to cut and apply to a box, and I cut stencils for the moderately complicated sign.

Except I can't really make whatever I want as often as I want because I have to share with all of the other thousands of library patrons (none of whom have actually used the Cricut yet), and I have to do it during library open hours.

So I've decided that I need a Cricut.  So I will have 24 hour a day access.  That is not at all ridiculous or frivolous.

You probably need a Cricut, too (if only so I can use it when I see ya).

*the trophy's not done yet--Hubby needs to put the winner's name on, and he feels about the label-maker almost the same as I feel about the Cricut.  I don't want to deny him that pleasure.
Posted by Scarlet Bluefield at 4:30 AM