It's been a while since we've had a chicken update

It's just as well I didn't post a menu plan last week, since we actually ate the meals on the menu plan once during the week.  Just once.  This is such a busy time of year for us.  One day I counted, and I made six trips to town and back (that's 13 trip segments) getting people and desserts where they needed to go.  I suspect that I would be appalled if I counted how many miles I have driven just between our house and town in the past two weeks.  That's why I haven't counted.  It's all worth it, though (I think), especially the desserts.  And once school starts, it'll probably be an average of one trip to town per day, hallelujah.

I'm not going to do a menu plan this week, either, but I thought I would talk about chickens.  We have them, you know.

Where should I begin?  The last update was on the Bigs' 2nd birthday in May, so I guess I'll start then.

So, Indigo wasn't feeling well.  She was moping around and not laying eggs.  Since then, she's perked up, and is back to laying, although she isn't laying very regularly, and her shells are pretty fragile.  She might be laying more than I'm aware of, because she is prone to laying rubber (shell-free) eggs, and I found evidence of one in the hen house a week or so ago.  She was laying so many rubber eggs that for a while the others would follow her around pecking at her vent, waiting for the rubber egg to come out.  One day I let the girls out and then noticed that Indigo had a ruptured egg membrane sticking out of her vent--the others got to and ate the egg before it was even out. 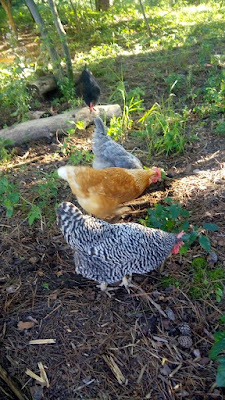 Also not laying regularly, or at all, is Esther.  She hasn't laid since August 1.  She's molting.  It's about a month earlier than last year, so I was caught off guard, but this is a more sensible time of year to lose one's feathers. 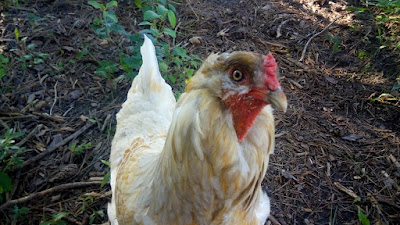 And rounding out our roster of non-layers is Rocky.  I think she must be heading into a molt, too, although I haven't noticed any of her feathers missing or on the ground.  Yet. 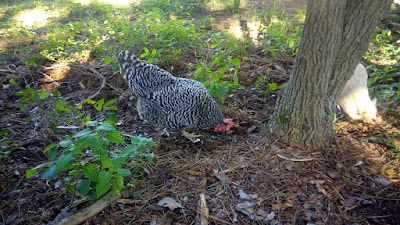 So if you've been paying attention, you will realize that we only have two chickens who are laying with any regularity these days.  That is not enough to keep up with our consumption, especially with AKD still at home.  I've been buying eggs for a couple of weeks now, and I'm contemplating whether I want to add a few more girls to our flock in the spring.  I wasn't planning on it, but now I'm not sure.

I felt like six was a really good number, based on egg production and feeder/waterer capacity, and five was actually a good number of chickens when they were all laying regularly.  In fact, we almost couldn't keep up with them when they were all laying regularly.  Chickens can live for a long time if they're well cared for, although their egg laying drops off tremendously at around three years of age.  Our max capacity is around 8 (although I would not be opposed to squeezing a couple more in), and we have to get at least three at a time.  And we all know that there will be no old-age culling around here.

I'm also reluctant to go through the acclimation process again, unless we can come up with a secure grow-out pen for the chicks.  I lost so much sleep over chicken integration when the Bigs and Littles needed to be in the same coop, but the Littles were still so little.

We'll see, I guess.  I've got time to contemplate.

Toasty and Koko are still laying, and they are doing well.  Toasty is still at the top of the pecking order and Koko is at the bottom.  Since we lost Hazel, Toasty seems to have lost her desire to be a rooster--I haven't seen her mount any of the others for a while. 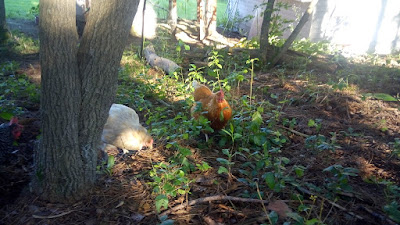 I've been letting the girls out to free range for 2-3 hours at the end of the day most days.  They seem to be very attentive to the sky and have been avoiding aerial predators thus far.  It's funny.  If I go out to the coop early in the day, the girls might line up to greet me, but for the most part, they don't pay me much attention.  But if I go out anytime after about 5:30 p.m., they start pacing in front of the door, hopping over each other when they get in each others' way.  The girls can tell time, and they know they're going to be let out.

Oh, those silly birds have brought so much joy and laughter into my life.  I'm grateful to have them.
Posted by Scarlet Bluefield at 5:00 AM