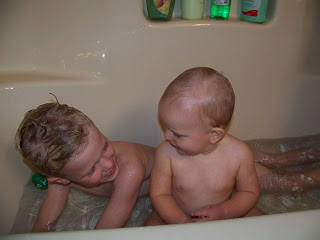 About this picture: Thursday (and Saturday and Tuesday) is bath and shower day in the Blauwkamp household, and today Logan and Caleb elected to take a bath. They were so cute in the bath together that I just had to take a picture of them (maaaa-om!). What you don't see (or actually, you can just see a little bit of) is that the colors of the shampoos and soaps all match the decor of the bathroom. Just an indication of one of my many compulsions. In fact, up until a week ago, I had orange baby wash in that bathroom, and that was OK, because I had burgandy body wash (the colors in that bathroom are a mossy green and burgandy). Now the body wash is also green and the orange clashed horribly, so I had to replace it with green. The labels all have to be facing forward, too.
. . . . . . . . . .

Have you seen the commercial for NEW Just Bunches? I think it's pretty funny. All those guys in a wind tunnel with their bowls of Honey Bunches of Oats, blowing the flakes away. By the way, I really thought I would like Just Bunches a lot, because Honey Bunches of Oats is one of my favorite cereals, and I like the bunches the best, but it was too much of a good thing. So the plan is to buy both cereals at the same time and then mix them to my liking.
. . . . . . . . . . . . .
I can see how middle children might have issues. Everyone always pays more attention to the youngest--we parents of youngest children would say that's because it's necessary to pay more attention because they are less independent and need more help, but it doesn't really matter that there's a good reason: the fact remains that the youngest gets the most attention. The youngest is always cuter, too, if only for the reason that behaviors that are cute at age 1 are completely unacceptable at age 5.
Then there's the oldest. He always gets to do everything first. And everyone's really excited when the oldest does something first, but by the time the middle child gets around to doing that same thing, it's old news. Doesn't matter that it's a first for the middle child, it's just not nearly as exciting as when the oldest did whatever it was. Case in point: I have already cut down on the number of sports pictures that I buy of the kids, even though this fall is only Logan's 2nd time ever playing a sport. Cody's been playing sports for years, so it's old hat.
The middle child never gets anything new, because he's getting hand-me-downs from the oldest, but the youngest gets new stuff because the combination of the oldest and middle children using things wears them out. There are never any pictures of just the middle child. The oldest child gets pictures taken of all those firsts that are just not as exciting by the time the middle child gets to do them, and the youngest child is just so darn cute, but the middle child only gets group shots. The youngest gets to spend time alone with mom or dad, because as I said before, he needs more attention. The oldest gets to spend time alone with mom or dad because he's off doing those things the middle child is still too young for (like Cub Scouts or Feed My Starving Children). The middle child always has to share: things, time, attention.
Now we can say that the middle child used to be the youngest child, and that's true, he used to enjoy all the perks of youngest-dom. But is that few years of being the youngest enough to make up for a life-time of always being in the middle? 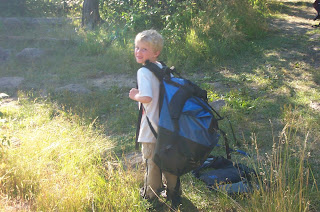 Posted by Scarlet Bluefield at 8:59 AM