Last week I finally got around to doing one of the things I wanted to do before Christmas but never got to: I made clothes for the magnetic paper dolls that I gave Bubby and the Camp Scarlet girls for Christmas (yes, those poor babies have been naked for well over a month now--at least they've got lots of hair styles to choose from).  I got the idea after seeing magnetic dress-up dolls like these

at Target.  It's really easy, and they're so cute!
I used the dolls found over at a fun, free website: Making Friends.  First, I chose and printed bodies and hair on magnetic inkjet paper

and cut them out using ordinary scissors.  Next, I chose clothing for the dolls, using the themes provided at Making Friends, printed them on magnetic paper

(I bought mine on amazon.com

, but office supply stores carry it as well), and cut them out.   A couple of my favorites are the tiedye and denim themes, but there are so many cute themes to choose from--too many, I think (I only bought 20 sheets of paper!).  They even have Bible people that you can make, as well as a Nativity set, that I may make next Christmas. 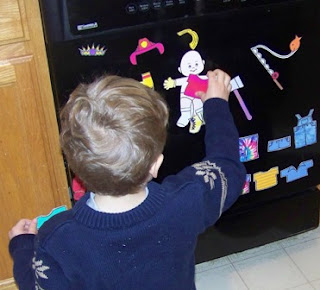 Each of the children was given a metal tin in which to keep their dolls and accessories, but Bubby (and Logo, but don't tell him I told you) have been playing with ours on the metal face of our dishwasher.  So much fun!
If you don't want to invest in magnetic paper, but would like to have some paper dolls to play with, you could easily print the templates on paper.  I would for sure print the bodies on a heavier paper like cardstock, or glue them to cardboard before cutting out, and I would probably reinforce them with clear contact paper (which you can find near the shelf-liners at Target or Walmart), or clear packing tape.  And remember to leave tabs on the clothing when you cut it out so you'll have something to help keep the clothes on.