We now interrupt our regularly scheduled blog (which was to include pictures and videos from our Thanksgiving holiday) to bring you this announcement:

We had a little bit of excitement around here last night. Cody was home sick from school on Tuesday, vomitting, but felt well enough to go to basketball practice. And he was fine, until about 15 minutes in, when he fainted and fell chin first into the floor, opening up quite a gash, and causing his ear to bleed. Well, three paramedics, a random racketball player, several basketball parents and YMCA staff, three nurses, one doctor, an EKG, blood tests, IV, cat scan, chest x-ray, and four stitches later, he's fine. Wants to go back to school. 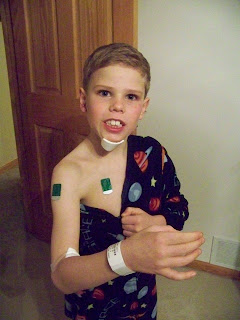 You can see the bandage on Cody's chin, plus some EKG leads, the IV spot in his arm, and the hospital bracelet. I took a picture of Cody's stitches, too, but it came out blurry, and that's just a bit too graphic to include, I think. 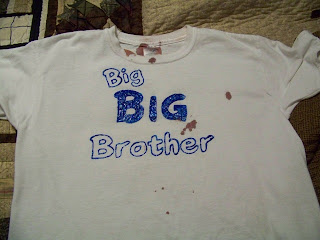 Cody wanted me to take a picture of his bloody shirt.

Things to be thankful for (regarding this incident):
This happened less than 2 miles from the emergency room. Both Scott and I were in town and present at the time. It was Cody rather than Logan or Caleb (neither of whom would have handled it nearly as well) who got hurt. It happened in 2008, so we still have a chance of not meeting our (huge) medical insurance deductible for three years in a row. We have medical insurance, so we will enjoy discounts on Cody's care, and we've met our deductible for 2008, so we won't have to pay 100% of the remaining cost. The doctor was great with Cody. The nurses were, too. Darcy was home, answered her phone, and was able to come pick up Caleb and Logan and take them home with her. Cody seems none the worse for wear, and he'll have an interesting story to tell.
Posted by Scarlet Bluefield at 12:26 PM