Well, I'm sure you've all been holding your breath waiting for the science fair experiment results, so here you go. As you know, Code-man's science fair project is titled, "Does Temperature Affect the Growth of Stalactites and Stalagmites?" Since real stalactites and stalagmites take thousands of years to grow, Code-man decided to grow crystals that form in the same way as cave formations. Cave formations grow as water containing dissolved bits of rock drips into a cave and then evaporates, leaving the rock behind--magnesium sulfate crystals form in much the same way, growing larger as the water it's dissolved in evaporates.

So Code-man made a super saturated magnesium sulfate solution, and placed it into two cups. Between the cups, Code-man draped a piece of string. The idea is that the mag sulf solution will move up the string though capillary action, then down to the dip due to gravity. If the water then evaporates before the drop falls, a stalactite will form. If it drips first, a stalagmite will form. Code-man set up three sets in three different temperature environments: room temp, refrigerator, and crock pot on warm with the lid off. We actually ran the experiment in the different temperatures twice, and didn't note any stalactite growth during our data recording period. 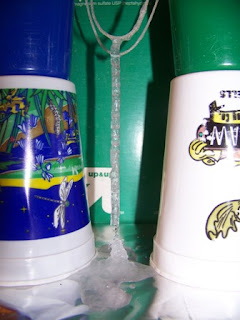 I was frustrated by the lack of growth, so I set up another experiment. This time, all of the variables were exactly the same, except one: the string drape. I know they were exactly the same, because I draped two strings in the same set of cups, and even then, the difference in string drape was only about 1/8 of an inch. This time, in one hour we had about 1 inch of growth on one of the strings, and about 1/4 inch on the other (as you can see in the picture above, after 2 days, we have a column (a stalactite and a stalagmite that have grown together). It's about 5 inches tall). This, more than anything, convinced me that we were not going to be able to get meaningful data from our three different environments. Even if we did get something to grow, we wouldn't be able to tell if any differences were due to the temperature, or to the drape.

We did, however, make enough observations to draw a few conclusions. We noticed that in the cold environment, crystals started forming in the solution at about 4 hours in--the mag sulf didn't want to stay dissolved. From this, we conclude that if a cave is too cold, stalactites and stalagmites will either form very slowly or not at all, because there will be less rock dissolved in the water. In the hot environment, crystals started forming on the surface of the solution--meaning they were forming as the water evaporated--at about 10 hours in, and in the room temp environment, crystals didn't start forming on the surface until 24 hours in. From this, we conclude that stalactites and stalagmites are likely to form more quickly in a warmer cave, as the water will evaporate more quickly. Exciting stuff, eh?

Posted by Scarlet Bluefield at 11:53 AM