Wow, has it really been almost 2 weeks since I've blogged?  What happened?  Well, I'll tell you.  Or maybe I will, if I get the time, which, at this point, seems unlikely.  Case in point: it's already more than an hour past my bedtime and I've just started this one post.  Looks like my brother's going to win for sure this month.

So, have y'all been watching The Amazing Race this season?  Flight Time and Big Easy of the Harlem Globetrotters are back globetrotting again, competing in a race around the world.  Since we've been rooting for them on the Race each week, we were excited to have the opportunity to attend a Globetrotters game earlier this month.  Before the game, we headed over for a picnic lunch at Minnehaha falls. The game was great fun--we had a terrific time.  I was a little disappointed that Big Easy wasn't playing that day, but I loved watching Flight Time.  I may be biased, but in my opinion he was the most fun to watch.
After the Globetrotters trounced the Washington Generals, and we witnessed several four-point baskets, we stopped by Target Field, where the Twins play, to check it out.  Who knew Target Field would be so close to Target Center?  Well, it makes sense, I suppose.  It's really amazing how they snuck an entire baseball stadium into a developed metropolitan area--it's just plopped right down in there. 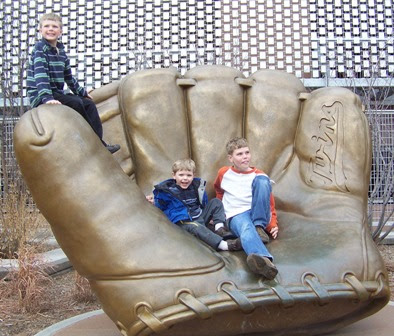 Well, that's one.  And it's only an hour and a half past my bedtime...
Posted by Scarlet Bluefield at 10:56 PM