Camp Scarlet was in full swing again this morning, even though Scarlet was dragging!  First, we worked on surprises for our moms.  I suspect that some of the moms will be more surprised than others.  Talk about it not being worth it to set up and clean up a craft project for such a short time of actual crafting.  The kid that I helped get started first was done before the third kid even started.  So after I spent a really long time cleaning up from that one (including washing one kid's clothes (yes, the yellow paint came out of her black pants)), the kids were already waiting to do another project.  The planned Easter egg hunt was scrapped due to snow (and lack of preparation on my part), and sidewalk chalk wasn't an option (again, due to snow), so we made Resurrection Rolls. 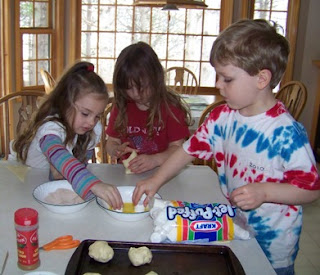 I used this recipe from Blessings for Life, but the recipe is posted, with slight variations, in many different places online (just run a search.  If you use swagbucks for your search engine, you might win prizes :).  They're really yummy, and the kids were amazed...not sure if they quite understood why I kept talking about Jesus, but they were amazed :) I'll be commenting in this color.

Now read Matthew 28:5-8 (I paraphrased the first few verses of chapter 28 for context, then read 5-7 with my injected commentary/translation for 3 year olds)

(I stopped the explanation here--I was losing them, and I figured they got the main points)

After that Jesus appeared in person to Peter, then to the 12 disciples and after that, to more than 500 people. Jesus' appearance to eyewitnesses, those who saw Him with their own eyes, would give support and prove that Jesus rose from the dead (1 Corinthians 15:3-6).

By rising from the dead, Jesus proved once and for all that He was the Messiah, the Savior of the World, the Chosen One, and the Lamb of God. By dying on the cross and rising from the dead, Jesus did what no other had ever done before. As both God and man, He overcame sin, death, and hell. And now because of what Jesus has done, these things no longer have any power over those who believe in Jesus and allow His Spirit to lead and direct them. Rather than being slaves to sin and death, Christians ( those who love and believe in Jesus) are free to obey God and do good ( Romans 6:17-18). The Bible says in John 8:36, "If therefore the Son shall make you free, you shall be free indeed."

However, we will only obey God if we listen to the Holy Spirit our helper. He enables believers in Jesus to do the right thing. It is important that we read the Bible (God's Word) because one of the ways the Holy Spirit helps us obey God is by reminding us of what He says to us in His Word. God's Spirit will never go against his Word. In fact, when we read God's Word, we are listening to the Holy Spirit. Of course, you won't always do the right thing; the Bible says this ) 1 John 1:5-10). But that is why we need to continue to confess our sins knowing that God forgives us, based on what Jesus did on the cross. This is also a reason we need to spend time with other believers in Christ so they can encourage us in our faith.