I made an error, a slip-up, a blunder.  I miscalculated; I messed up.

I used the impending arrival of guests as a handy excuse to replace the tattered and mildewed shower curtain liner in the bathroom that guests use.  As I stood in the shower curtain aisle of the Bullseye store, I debated.  Cream, white, or clear?    Clear, white, or cream?  I decided on clear, reasoning that, in our less-than ideally lit bathroom, a transparent liner would allow more light to illuminate the shower stall. 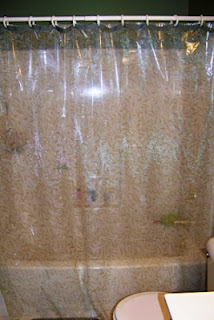 Now, I have no way to hide the clutter in the bathtub.  It's a little distorted by the plastic of the liner, but still clearly visible.  And I'm disappointed.  It bugs me.

Not to worry, though, friends.  The basement bathroom has a cream shower curtain liner...and a solid brown shower curtain.  All I need to do to fix my goof is switch 'em.

If only all of life's mistakes were this easy to correct...

Posted by Scarlet Bluefield at 4:00 PM