So...did you watch the game yesterday?  As you may or may not have gathered, my middle child is a football fiend.  Doesn't matter who's playing--if there's a game on, he has to watch it.

Don't get me wrong, the rest of us like football, too, but none of us is obsessed the way he is.

So I knew we had to watch the game, and I thought it might be fun to make a special treat, so I made these cute little football cake bites (differentiated from cake pops by the marked lack of sticks). 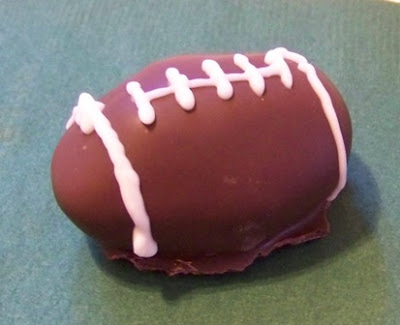 Now don't laugh at me and my poor excuse for cake bites!  We are just going to eat them, after all--no need for perfection.  Or even pretty good-ness.

I cannot for the life of me figure out how to 1. get the cake bite off the fork on to the wax paper to harden and cool without gouging the side of the thing (thereby ruining the coating) and 2. how to keep excess chocolate from pooling under the bites.  I mean, I would think that a full 180 seconds or so of holding the darn things over the bowl, tapping gently and scraping dripping chocolate away would be enough to avoid that pool.  I thought wrong, apparently.

The important thing is they tasted soooo good.  The secret to moist cake bites appears to be freezing the cake for a while (a while, as in three months--I used the leftover cake from Roger's birthday), then thawing it before turning it into cake pops or bites.  None of the other folks out there in blog-land with their cute little cake pops will tell you that.  Of course all of theirs probably just turn out moist and perfect as a matter of course.  *sigh* 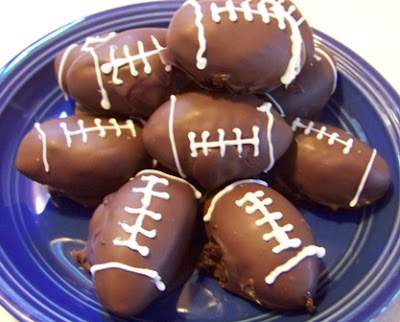 Anyway, according to Buffalo Wild Wings, there are 214 days until the next football game.  But hey, just in case there's someone in your life as obsessed with football as my little MC, here's how to make your own football cake bites or pops.

Follow the basic cake pop instructions from here, except instead of forming balls, make football shapes.  Dip in chocolate (I used Wilton's dark chocolate candy melts) and allow to cool.  Use white chocolate or candy melts for the laces.  I put mine into a ziplock bag with just a tiny hole cut in the corner.  You could also use a toothpick or skewer or paintbrush to apply the laces.

If you're feeling especially ambitious (and you would have to be, to attempt this, which is why it's a good thing you have 214 days to practice), you could do football helmets like Jasmin at 1 Fine Cookie did.


Are these not amazing?  Jasmin gives ingredients and instructions to make helmet cake pops for every. single. NFL team.  That's 32.  Thirty-two!  The woman, unlike me, is a cake pop goddess.
Happy football cake bite making!
(Oh, and if you're not in to football, try making baseballs or tennis balls or soccer balls.  Balls are a natural for cake pops!)
Posted by Scarlet Bluefield at 3:19 PM