Chicken update and new babies on the way

Saturday was the Littles' 2nd hatch day.  As often happens with younger children, their special day passed without fanfare.  It was on the calendar, but did I look at the calendar?  No.  Not until it was too late.  Whoops.  Anyway, it's been a while, so I thought it was time for a chicken update.

We've entered swamp season in the coop.  Melting snow has made it quite wet in there.  This year, we don't have standing water, at least, and the snow is almost gone, so we're probably not going to.  Still, it's wet in the run, and because it's wet, it's also a bit stinky.  It's an awkward time of year for footwear.  It's definitely muddy enough that I want to have my chicken boots on, but there's still enough ice around the coop and on my path to the coop, that I want to wear boots with a little more traction.  Usually the chicken boots win. 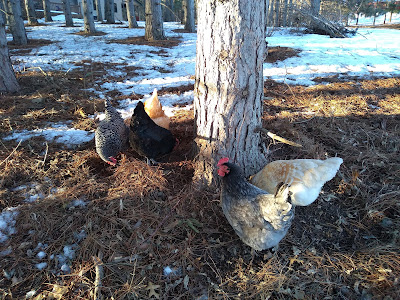 I've been sending the girls out to play just about every afternoon.  At first, they were reluctant to walk the 20 feet or so on snow to get to the cleared ground, so I set up a couple of logs as a bridge for them to walk along so they wouldn't have to walk in snow.

A couple of weeks ago, enough snow had melted that they were able to walk along the northern perimeter of the yard to get over the the garden and climbing wall area, but then they forgot how to get back to the coop.

Koko is the most sensible, so she just walked across the snow (I'm really bad at estimating distances, but 20 yards or so?  Too far to fly), Toasty followed her, but got stuck in some deeper snow under the trampoline frame.  I led Rocky and Esther to safety around the perimeter, but Indigo decided to go it on her own and flew in three great bounds over to the fire pit, about halfway across the yard, and had to be rescued.  Indigo is not fond of being picked up or carried, but we reached a tentative truce that day--she seemed to know that she wasn't going to be able to get out of that situation by herself. 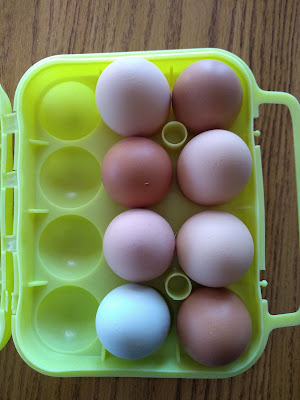 All five of the girls have resumed laying after their molts and winter, although they are not yet laying consistently.  Still, it's been thrilling to find eggs in the nest box again.  They are getting "older," so I expect production to decrease--peak egg production is generally between 1-2 years of age.

In other chicken news, Bubby and I ordered new chicks the other day.  They're supposed to arrive around April 23--it kind of blows my mind that their eggs haven't even been laid yet.  I'm a bit reluctant to receive the birds that late in the season, because I want them to be old enough to begin laying before the cold weather sets in, but that's the date that was available.  It's about 3 weeks earlier in the year than I got the Bigs, so maybe it'll be ok.

Bubby decided that he wanted a Cochin, which is a larger breed that's super fluffy and has feathered feet and five toes (most chickens have 4).  He plans to name her Fluffer-Nutter (anyone else remember fluffer-nutters?).  He chose the gold laced coloration. 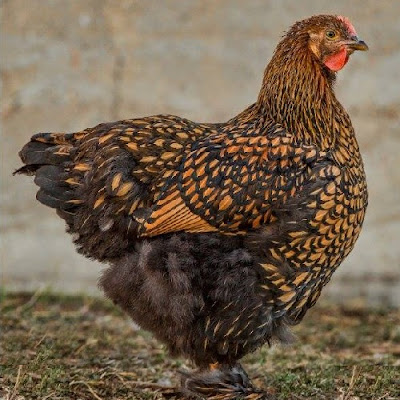 We also ordered a California White, which is a cross between the white leghorn (leghorns are the chickens commercial egg producers use--if you're eating a white egg that you bought at a store, it's from a leghorn) and the California gray.  It's heavier, and therefore less flighty, than white leghorns, but is still a prolific egg layer.  I wanted white eggs in my egg basket, and I chose this breed because it's friendly and cold hardy, but still a good layer. 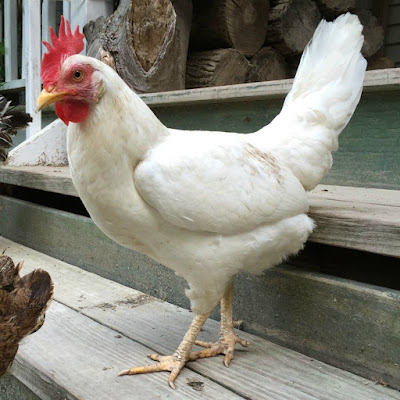 And our third new chick will be a Cream Legbar.  I've wanted one of these ever since I heard of their existence, because they are one of the few breeds that lays blue, and only blue, eggs (there are a few breeds that might lay blue eggs, but they could also lay other colors).  Cream Legbars are interesting looking, too--I love the little poof on their heads, too. 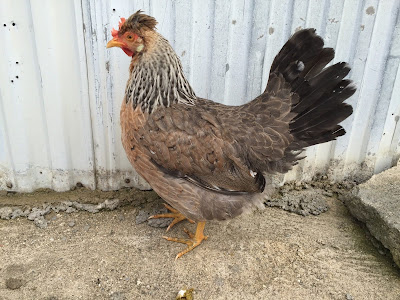 We're looking for names for the California White and the Cream Legbar, so drop your suggestions below.  Bonus points if they don't start with E, F, I, K, R or T and/or are a really good pun.

Next time we order chickens (yes, we're already planning our next purchase.  We would have gotten one more this time, but I think our coop is maxed out for space with 8), I would like to get a Welsummer.  They lay dark brown eggs with speckles.  Speckles!

I think that's all I have to say about chickens right now.
Posted by Scarlet Bluefield at 3:30 AM