When last we spoke (about chicks), I wasn't getting any (chicks), at least not that day.  I had been assured that my Blue Cochin and Cream Legbar would be coming at the end of May, and that my California White, along with my bonus Speckled Sussex and Americana, would be coming the next week.

Imagine my surprise when I actually did get a call the next week, saying my chicks were in, and would I like to come pick them up at 1 p.m.?

So I picked up my California White and my two bonus chicks, and asked about the other chicks that were supposed to come at the end of the month.  Yes, they were still supposed to arrive.  Yes, the hatchery guaranteed they'd come.

In the week that they've been with us, the Minis, as we've chosen to call them, have settled in nicely.

This is Charlotte, the California White. 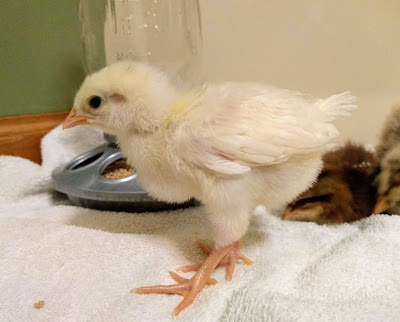 Charlotte is the loudest of the three, and is possibly the ring leader?  It's a little too soon to tell.  She is definitely plotting an escape, and I think she'll be capable of it before we know it.  Charlotte was the first to perch on the little roost, and she spends a lot of time there gazing longingly at the open top of the brooder.

This is Buttercup, the Speckled Sussex. 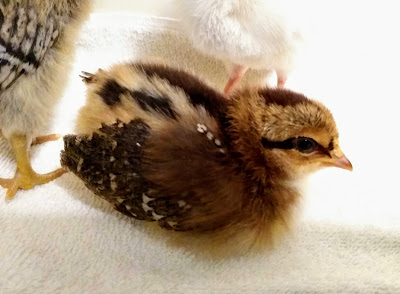 Buttercup likes to peck at Charlotte's feet when Charlotte is on the roost.  Buttercup is also super fast, zipping around the brooder, seemingly at random.  When I took the Minis out for their photo shoot, Buttercup decided to spend the whole time trying to dust bathe on the towel (I'm going to go get the girl a dust bath as soon as I'm done typing).  I took a short video, but I guess I must have deleted it accidentally when I was deciding which photos to show y'all.  That makes me sad.

This is Guacamole, the Americana. 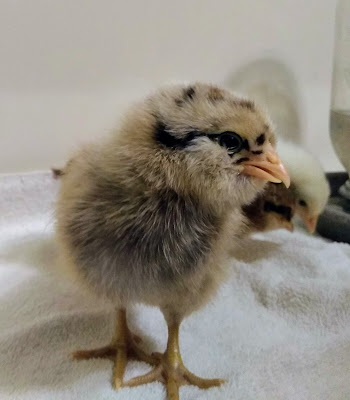 She is so fluffy!  Guac is the biggest, and also the calmest, of this group of chicks.  She seems pretty laid back. 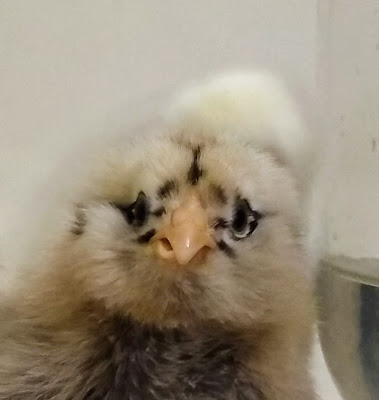 See how her bottom beak doesn't line up with the top?  This can be caused by weak genetics or improper incubation temperature or just bad luck.  A cross beak makes it difficult for a chicken to eat or drink, and because of that, it can be a fatal condition.  There's nothing that can be done about the cross beak, unfortunately.  Nothing will make it better.  So far, she's eating and drinking well, and if she does start to have a problem, there are some things we can do for her to make eating and drinking easier, but her future is uncertain.

I got another call from the feed store yesterday.  Apparently, all of the Cream Legbars are sold out for the season.  And the Blue Cochins are all spoken for.  Yup, the very same ones that the hatchery guaranteed would be available at the end of May.  Would I like an olive egger and a light brahma?  Yeah.  No.  No more chicks for us this year.  Maybe we'll try again next year.  Or not.  Although I think a lot of hatcheries have been having trouble keeping up with demand, and it's not the feed store's fault, I don't think I'll order chicks through this particular feed store again.  I'll go with a store that orders from a larger hatchery.

Nonetheless, I am happy to have the chicks that I do, for as long as they're with me. And, on the bright side, chick care has become a lot less complicated now that we're not getting a second set of chicks four weeks later.

So that's that.  And those are the Minis. And that's all for now.  Take care, friends.
Posted by Scarlet Bluefield at 3:30 AM