No chicks for me!

Funny story.  I was supposed to be spending today picking up three new chicks and getting them settled in their new home.

I ordered these chicks in February.  That's two months ago, and long before their eggs were even laid.  One would think that two months notice was plenty, and that I would be able to get the chicks I wanted.  One should know better than to count her chicks before they're hatched.

The first indication that something was amiss was a phone call from the feed store about a month ago.  They were not going to be able to get the gold laced Cochin that we ordered, but they could get us either a blue Cochin or a light Brahma.  We decided on the light Brahma, because this:

I mean, who wouldn't want these majestic creatures in their backyard flock?  I wasn't even disappointed by this turn of events.

About a week later, another phone call.  No light Brahma for us, but would we like the blue Cochin?

OK, yes.  We already have a chicken with the blue color variation, and I was really looking forward to having a light Brahma, but this chicken will be fluffy, so we'll take it.

So all was well, mostly.  I mean, does Fluffer Nutter even make sense as a name for a gray and dark gray chicken, even if it's super fluffy?  I don't know.  But we ordered three chickens and we were going to receive three chickens, and we would love them, even if one of them wasn't our first choice.

Fast forward to Wednesday.  Yeah.  Two days ago Wednesday.  The hatchery doesn't have the blue Cochin or the Cream Legbar.  Not this week.  But they promised, guaranteed, in fact, that those two chickens would come at the end of May.  Which meant we were still going to be getting our California White today.  With no buddies.  And two more chickens in 5 weeks.  Which is not ideal.  For multiple reasons.

My good friend Brenda, whom I met two months ago, but with whom I have bonded hard over these past months, assured me that she would try to find another chicken for me so my poor CW wouldn't be alone, and she would call me Friday to pick up one or more chicks.

OK.  It's ok.  I'm ok.  Everything is O. K.  I spent Thursday adjusting my brain to the changes, and hoping that it would be two chicks that I would be picking up today.

But no.  Nope.  No chicks for me.  Brenda called this morning to let me know that my California White never shipped.  There was some kind of problem at the hatchery, she didn't make it on to the truck, and they're not allowed to ship chicks that are more than a day old.

So where does that leave us?  Well, supposedly, my California White, Americana, and Speckled Sussex will be coming next week.

Wait.  What?  Yeah.  I'm getting three chickens, only one of which I actually ordered, a week later than they were supposed to arrive.  And then. Yes, and then, four weeks later, I'll get the blue Cochin and the Cream Legbar.

I just don't even know what's happening anymore.  We're going to make it work.  Whatever it turns out to actually be.  Because now I know, from experience, that I need to not count these chicks before they hatch.

Here's the lineup, as it currently stands.  Yes, this, along with our current five, is too many chickens for our coop.  We'll figure it out. 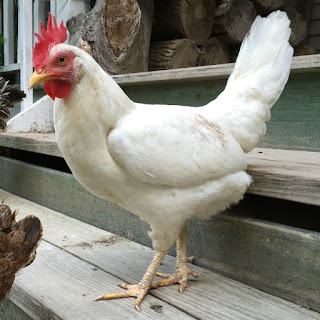 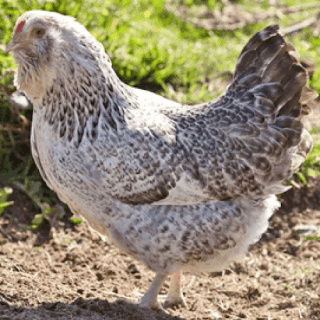 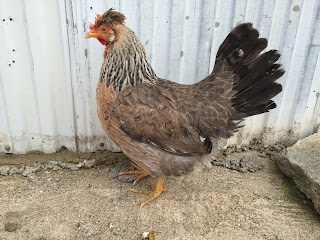 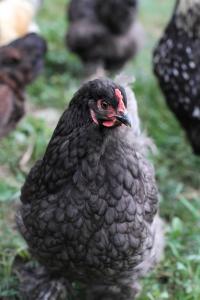 Posted by Scarlet Bluefield at 12:38 PM