Welp.  I guess it's (way past) time for another chicken update. 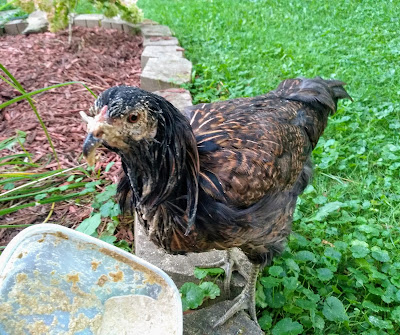 We lost our sweet chick, Guacamole, in October.  You may remember that Guacamole was our Americana pullet from the spring hatch, who developed a crossbeak.  Guacamole was sweet and she was a happy chicken.  I was determined to take care of her and give Guac a good life for as long as I could.  I knew that her health was fragile, so I tried to hold her in my heart loosely.  She spent her last moments soaking up the sun.  I did my best for Guacamole, but it turned out my best wasn't enough for her.
We currently have 7 chickens, Toasty Crunch, Rocky, Esther, Koko, Indigo, Charlotte, and Buttercup.  They're doing well, for the most part.  Indigo is moving slowly these days, and I had to put a lower roost in the hen house for her because she can't fly up the two feet to the regular roost anymore.
In September, our California White, Charlotte, laid her first egg, and shortly after, all of the older chickens stopped laying due to molt, and continued to not lay because of shorter days.  So we've spent several months getting about 5 eggs a week, which is better than nothing, but is way fewer than our family eats in a week.  In just the past week, Toasty Crunch and Koko started laying again, so things are looking up in the egg department.  We're still waiting for Buttercup's first egg.
At some point during the past several months, Koko managed to land herself at the top of the pecking order.  Not sure how that happened, but there she is.

So that's it for now, I guess.