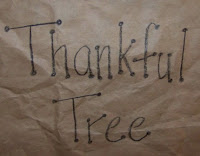 Whew!  What a busy weekend!  But before I get to that, I wanted to introduce you to our "Thankful Tree," just in case you'd like to make one of your own.  The kids and I just cut up some brown paper grocery bags, crumpled the pieces (don't you think the crumples sorta kinda look like bark?), and taped them to the wall in a tree-shape.
It was a great time to talk with the kids about how trees look: bigger branches closer to the tree trunk lead to smaller branches at the edges, and branches tend to form acute angles outward, rather than being perpendicular to each other. 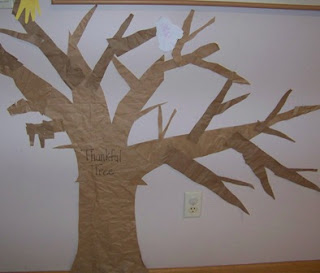 Then I traced each kid's hand (plus mom and dad's, too) and cut out several "leaves" in each size. The idea is to write something we're thankful for on our paper leaf-hands, and put them on the tree (yes, I realize we're going the wrong way with this...leaves are supposed to be falling off the trees at this time of year). I'm hoping to have everyone add a leaf to the tree each day until Thanksgiving, but I'm realistic enough to realize that may not happen, and flexible enough to be OK with that.  So far, Bubby is thankful for duckies, and Pal is thankful for snow.

Maybe we'll be able to think of some way to incorporate our Thankful Tree into our Thanksgiving Celebration later this month, but in any case, I think it's a good practice to encourage a culture of thankfulness in our daily lives.

So, our busy weekend.  The Bluefields came into town on Thursday to hang with us for the weekend.  Pretty much as soon as they arrived, we bid them and our three children adieu and escaped for a much-needed date...we went to the kids' school conferences.  Isn't that romantic?

The older kids didn't have school on Friday, so they and I had a relaxing morning at home, while the Bluefields and Hubby took Bubby (oh, right, Roger) to school.  That afternoon we took a short hike at a state park--what a gorgeous day for a walk in the woods. 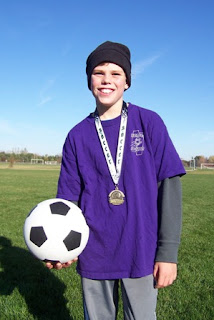 AKD and MC each scored a goal during their games, by being in the right place at the right time and seizing the moment, and their teams both won (not that we keep score, or anything). 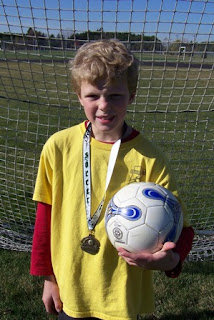 Bubby (Roger!  I keep forgetting) wants to play next year so he can have a metal.

After soccer, it was off to a park for a picnic lunch, followed by a "Pumpkin Party," complete with a hay ride and s'mores.

Saturday was also Roger's (see, I remembered this time) birthday.  My baby is 4! 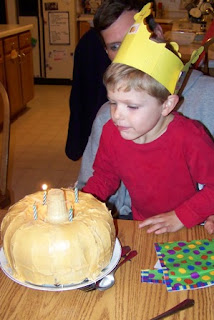 That's supposed to be a pumpkin cake. I think it would look more like a pumpkin if 1. I hadn't messed up and added a drop of green food coloring to the orange frosting in a misguided attempt to make it a deeper orange, and 2. I hadn't been stingy with the frosting and opened another can to turn the stem green. Oh well...once again, not my best effort, but it did the job.
One of the fun things about living here is we decorate for birthdays.  Usually just streamers and balloons, but it's enough to distinguish a birthday from just any other ordinary day.  This time, just for fun, Hubby hung Bubby's spider from the light fixture :)
﻿ 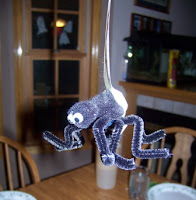 I think it's still there, although it's crawled up a little bit.  (oh, and hey, you can see the ghost clings in the background)

Roger wanted to have a bonfire for his birthday, so after supper, out we went to burn some wood.

The Bluefields left on Sunday, and we spent the day trying to recover from the excitement of the previous couple of days.  Oh yeah, and we made 6 apple pies.  But that's another post.

On Monday I was sitting in my bedroom talking on the phone when all of a sudden, out of the corner of my eye, I saw a ninja walk by.  Later on, a skeleton and a tiger started wandering around in our house, too.  It was pretty frightening.  I haven't seen them since then, so I'm thinking it was a one-time thing... 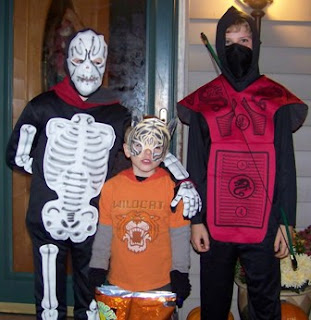 Posted by Scarlet Bluefield at 2:35 PM