No, I haven't just lost my wrestling match, and I haven't been captured for display as a biological specimen.

I have been pinned on Pinterest, a sort of virtual cork board.  Apparently (I say apparently, because I have yet to try Pinterest, being of the opinion that such a thing would be very detrimental to my housework completion ratio), as you're humming along in the interwebs, and you find an idea or image that you'd like to remember, you pin it to your Pinterest board.  It's better than just bookmarking sites you'd like to revisit because Pinterest displays a picture of whatever you've pinned, plus you can add commentary to remind yourself why you pinned it in the first place (look at me--I'm gonna talk myself into it, aren't I?).

Anyway, I've been pinned.  I know this because I saw one of my projects on Pinterest.  When I looked, it had been re-pinned (meaning someone else saw it and decided they wanted to remember it, too) 5 times.  I feel honored.

So the project that's been pinned is the duck from this post. I, personally, would have chosen the cow to pin, but I have the advantage of having the originals to look at :) 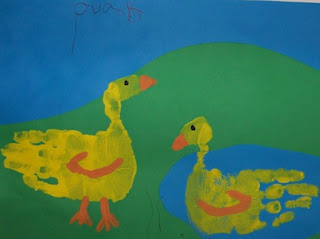 And I have to admit, those are some pretty cute ducks...I love the "Quack" up at the top.  And the pond?  Well, that's just inspired.

I'm pretty sure that my 6-sided snowflake tutorial and my file folder games have been pinned, as well, and there are a few other posts that I suspect must be pinned or featured somewhere, considering the frequency with which people view them.

Anyway, just thought I'd share--I'm not famous, but a couple of my projects are :)
Posted by Scarlet Bluefield at 2:39 PM