Homemade Moon Sand and Our Next Theme

The other day, Roger and I made our very own batch of Moon Sand.  Have you heard of this stuff?  It's sand, but it's moldable and doesn't dry out (well, maybe if you leave the top off?).  We won some in a drawing a couple of years ago and Roger l o v e s it.  I find it annoying because it gets everywhere.  I'm OK with it, though, because what falls off the table while he's playing doesn't get put back in the container, so eventually we'll run out.

Except we just made some more. *Sigh* What was I thinking?

Anyway, there are tons of Moon Sand recipes out there on the Internet, just do a search (if you use Swagbucks, you might earn points good for all kinds of gift cards and merchandise).

We mixed about 10 c. of play sand with ~ 3 c. of cornstarch, and added a little over 1 c. of water--our sand was already damp, though, so if you're starting with dry sand you'll probably want to add more water, up to ~2.5 cups or so.  To get a texture similar to commercial Moon Sand, use super fine play sand, which is available in lots of different colors.

That's it.  If it's a little dry the next time you want to play with it, just sprinkle a little more water on it and work it in.  Easy-peasy.

So that leads us to our next theme, which is:

Little known fact about Scarlet: when I was in college I spent a summer researching gene transfer in mosquitoes (more about that in a future post.  Maybe).

True story: this was the summer that the original Jurassic Park came out :)

ANYWAY!  The reason we made the moon sand was to put in our bug sensory bin. 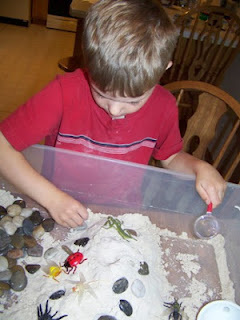 It's super simple: just the moon sand*, some river rocks, and a few plastic bugs (and yes, there's a spider, too, even though spiders are not insects).  I added a magnifying glass, bug net, some small plastic containers, a funnel and some tongs.

Are you excited, friends?  Bunches of beautiful bug projects coming up soon!

*If you don't like the idea of moon sand, pebbles, dry beans, or lentils would work well in this sensory bin.

Posted by Scarlet Bluefield at 8:57 AM

Email ThisBlogThis!Share to TwitterShare to FacebookShare to Pinterest
Labels: BUGS