We did a coop-building-blitz this weekend, and finally on Monday it was done enough for the chicks to move in.  There are still a few details that need to be finished, but it is good for now.  And none too soon--we left town for a week and when we returned the girls were HUGE.  No wonder they kept knocking their food over while we were gone.

As of today, the girls have been with us for 6 weeks. 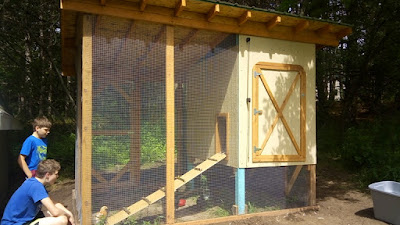 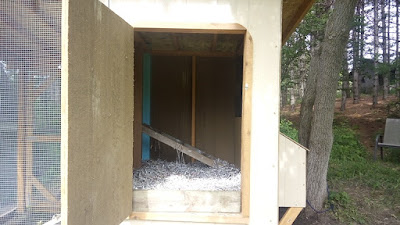 Inside the hen house, looking from the people door.  Hubby used an old ladder for the girls to roost on.  When they're bigger, the ladder/roost will be raised to about 2 feet off the ground. 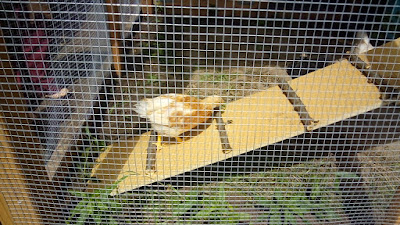 Toasty Crunch on the ramp.  Hubby used an old desk top that he found on the side of the road for the ramp, and branches for the cleats.  The girls are able to navigate it ok, but it's quite slippery between the cleats, and they're not quite big enough yet to just step from cleat to cleat, so I think we'll be putting a few more branches on. 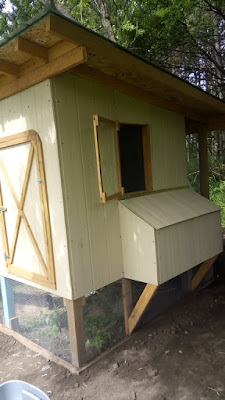 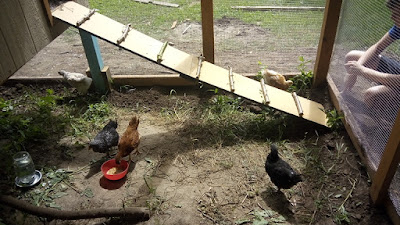 Esther (by the post), Rocky, Red (by the red bowl), Toasty Crunch (far side of the ramp), Austro, hanging out in the run.  When I think about how little they were when we brought them home, I'm just amazed.  I don't think we could even put one of them in the box they came home in now (and those boxes could fit up to 15 chicks). 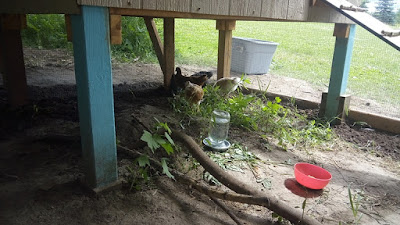 I put the Mason jar waterer down in the run so the girls have access to water without having to climb the ramp.  I also put their fermented feed in the run.  This week I ramped up fermented feed production because they really like it and because they're getting so much bigger. 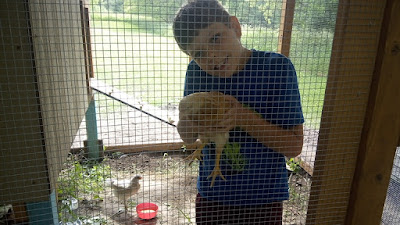 Bubby and Toasty Crunch.  Bubby is single-handedly doing the bird-taming around here.  We want them to be used to people, and not run away when we approach.  He picks them up as often as possible, and generally, they tolerate him. 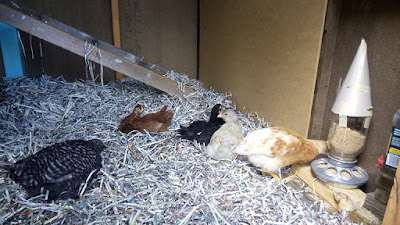 A friend asked me about chicken start-up.  Like what's needed, and how to do things.  I told her I'm all about cheap and easy.  In line with the "cheap" directive, I'm using shredded newspaper for bedding in the hen house.  So far, so good.  A little bit has migrated out the people door and the chicken door, but it's biodegradable, so it's all good. 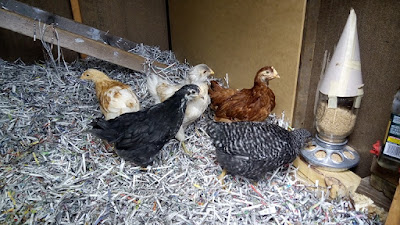 I put food and water in the hen house, too.  Hopefully within a few weeks I'll have the bigger/adult/permanent feeder and waterer made--those will be hung in the run.  The bigger feeder and waterer qualify for the "easy" directive.  Bigger, so I (actually, hopefully Bubby) don't have to fill them as often. 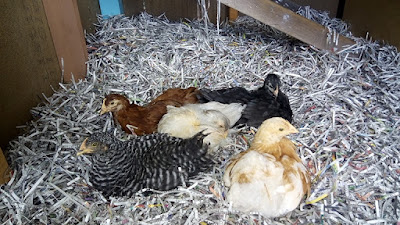 The girls, snuggled in.  Rocky, Red, Esther, Austro, Toasty Crunch.
Posted by Scarlet Bluefield at 6:30 AM