I figured out why it seems like we're so much busier than normal this summer.  I mean, we're always super busy during the summer, but this year?  Busy-ness has escalated to the next level.

It's because we're doing all the same things we usually do in a summer: family trips, Boy Scout camps, football camp, VBS, swim lessons, fun local outings, but instead of our usual 12-13 weeks, this year we get 10.  Everything is compressed.  There was one day this summer that we could schedule the kids' Christmas gift trip to an amusement park.  One.  (Glad I realized and got it on the calendar before the day passed).  The kids go back to school 7 weeks from today.

MC will be starting high school.  That's another reason this summer feels compressed.  Two a day football practices start the week before school (for freshmen--the rest of the team starts even earlier), so about 5 1/2 weeks from now.  The other night I dreamed that it was the first day of school and MC had to get to room 138.  I was with him for some reason, and we kept passing rooms until we got to the very last room on the right.  Room 138 was a bathroom, which, of course, I thought was a mistake, but within a few seconds of our arrival, not one, but two teachers came into the bathroom to start teaching their classes.  Talk about overcrowding in the schools...

That's the reason our summer is so short this year.  The school district is making improvements to the high school, and they are beginning this coming school year early so they can end early, and the following school year will start later than normal, so they'll have a nice long summer break in which to finish everything.

I cannot imagine what that summer will be like.  Hopefully awesome and amazing.  Definitely long.

Wanna know what they started with?  On the improvements?  The football stadium and parking.  They did it that way because those were things they could do while students were still in the building, but still, it's interesting to think that might be where the school district's and community's priorities lie.  Gonna get those done first, just in case construction falters.  No worries about classes meeting in bathrooms.  It's all good.

AKD will be a senior this school year. That means we're gearing up for all the lasts.  Last first day of school, last bike race season, last Homecoming, last final exams, last year (God willing) living full time with mom and dad (not that I want to get rid of him, but that has been the goal from the beginning--to raise independent, self-sufficient adults).

Bubby will be in 4th grade.  He's not changing schools, nor is it his last year in his school, but since I mentioned the other two, I figured I should mention him, too.

For some reason, our family always seems to go on a trip just as soon as school lets out.  And for most people, that wouldn't really be a huge deal.  But for us?  We always seem to go on trips where we need to pack gear and food and stuff that is not just clothes and toiletries.  It's a lot to manage when my brain space is taken up with last days of school stuff.  For this year's trip, we headed to the upper peninsula of Michigan (which really should be part of Wisconsin--you can ask AKD why it ended up with Michigan) for a backpacking trip, followed by a visit to the Keweenaw peninsula (that's the part that sticks up like a thumb).  Mosquitoes like me.  A lot.  Then again, what's not to like?

I didn't take very many pictures, but I did get this one. 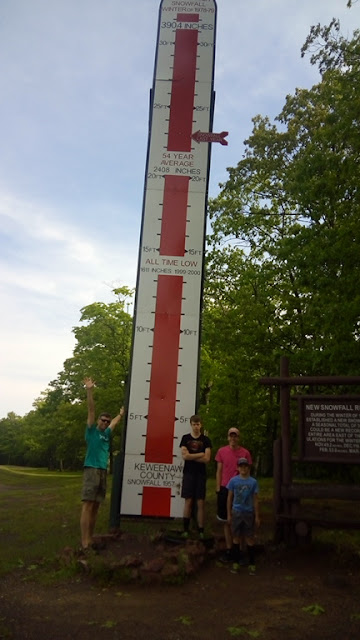 Did you know that they average over 200 inches of snow a year in the Keweenaw peninsula?  That's like stacking all three of my kids on top of each other and adding a very tall hat to the top one.  You never really see the road in winter up there.

Anyway.  Our summer is busy.  How's yours going?