I have an issue.

When I planted zucchini in the spring, I was planning to preserve the fruits by spiralization and freezing.  And I have done that.  But in my planning, I failed to take into account the fact that zucchini expands when spiralized.  Yeah, yeah.  I know.  Conservation of mass and all that.  Same mass; bigger volume.  Much bigger volume. Like half-a-zucchini-takes-up-the-entirety-of-my-biggest-baking-sheet bigger volume.

I feel like I already possess enough volume of frozen zucchini noodles.

We've entered the stage of the zucchini harvest where you go out to the garden and suddenly, there are three full sized, ready to be harvested zucchini, where yesterday there were no zucchinis, not even babies.  I currently have five zucchinis sitting on my counter waiting for me to decide what to do with them, and I'm pretty sure there will be at least one in the garden when I make it out there.  Not because there was one close to ready yesterday, but because that's how zucchini works.

We don't eat a whole lot of zucchini fresh.  Occasionally, I will grill or saute zucchini as a side dish.  Very occasionally.  I used to make a lot of zucchini muffins, but the kiddos aren't as fond of those as other kinds of muffins, so these days, I don't make zucchini muffins very often.  I have at least one soup recipe that calls for zucchini.  If I ever make lasagna* again, I would use zucchini for the noodles in my portion.  I suppose I could make ratatouille or galette.  I'm sure that would go over well with the fam (that was sarcasm, fyi).

So there needs to be some kind of zucchini preservation happening if I don't want to waste food (let me give you a hint: I do not want to waste food.  Ever. I'm kind of jealous of my friends** who have pigs to turn extra produce into bacon).  My choices are freezing, drying, and canning***.  All of which are viable options that I would be able to do.  The issue is, will I actually use the zucchini after preserving it?  Or will I be wasting the food and wasting the time, energy, and supplies used in the preserving process?

By the way, every single one of the the zucchini pickle and zucchini relish recipes in the world**** have sugar in them.  What the?  I mean, y'all.  I know sugar tastes good, but it is toxic, and shouldn't have to be added to perfectly good vegetables in order to pickle them.

So, hey.  Let me know if 1. you want any zucchini, and 2. you have any ideas for preservation and future use.  Together.  In tandem.  Because preservation doesn't do any good without future use. 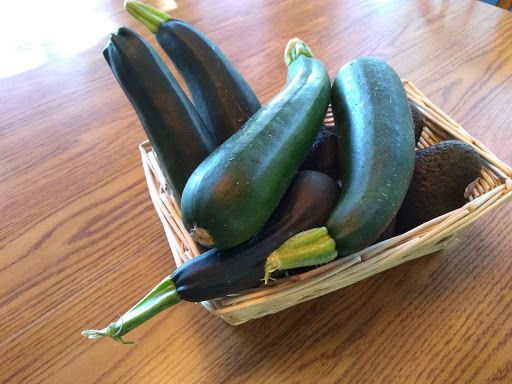 My fruit basket is looking decidedly green these days.  That's because the tomatoes are in the ripening bag instead of in the basket.  We could have a definite Christmas vibe going on if we wanted to.
In case you're worried about the small, avocado-shaped, wrinkly zucchinis with stickers, those are avocados.  Which I should also do something about soon.

P.S. Here are a bunch of zucchini recipes.  From my own blog.  Maybe I should listen to myself sometimes.

*It has been many years since I have made lasagna, partly because I have two kiddos who don't like cheese, partly because I have two (overlapping) kiddos who don't like tomato based sauces, and one grown-up (me) who prefers not to eat pasta.  If I wanted to satisfy everyone's preferences, I would literally need to make a separate portion for each person.  I think I'm gonna, though, because I'm kind of desperate.

**Not actual friends, in the sense that we actually know each other and interact and stuff.  YouTube "friends" who feed any and all overripe veggies and food scraps to their pigs, including, in one case, a problem rooster, raw and freshly dead, feathers and all.  Yes, I had to cover my eyes on that one.

***Also fermenting.  But I feel like it's even less likely that anyone would eat fermented zucchini.

****Maybe a slight exaggeration.  But I seriously have not come across a zucchini canning recipe that doesn't have sugar or a sugar substitute in it.

Posted by Scarlet Bluefield at 9:20 AM