As you (may or may not) know, I'm growing roma tomatoes in the garden this year.  I wanted to grow paste (as opposed to slicing) tomatoes because they're supposedly better for canning, both because they are more meaty/less juicy, and because they tend to produce one big crop all at once rather than continuing to produce all summer long.  Which is what you want for canning.  I was hoping for Amish paste tomatoes, because, well, I like the name, and, um, really no other reason, but the only paste tomato that was available as starts at my garden center was roma.

Well, that one big crop thing isn't happening in the way that it seems to me one-big-crop should.  I feel like it should happen that I am able to pick all of the tomatoes in one day, and then be done.  Instead, they're dribbling in.  Faster than a slicing tomato would, yes, but not one-big-crop fast. 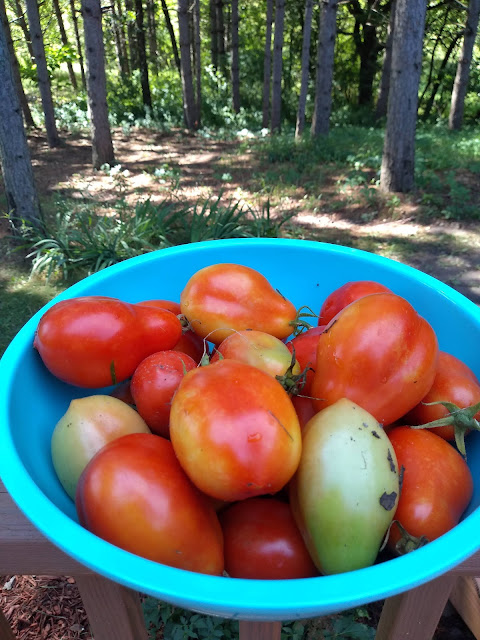 A week or so ago, a storm decided to get the harvest started.  I did not agree that some of the tomatoes the storm harvested were ripe, but the storm didn't consult me (how rude).  The ones that weren't as ripe went into a paper bag, along with an apple (and then later, a pear, which became known as the tomato pear, but that's a story for another day), on my counter, and I cored and scored the rest and stuck them in the freezer for later.  I am assured by the internet at large that this is an easy and perfectly legitimate way to both store tomatoes until I'm ready to use them, and peel the tomatoes.  No blanching for me this year (I hope).

Anyway, the romas are ripening and now I've accumulated enough ripe tomatoes, through a combination of storm-harvest-and-ripen-in-a-paper-bag and actual harvesting-ripe-tomatoes-and-storing-them-in-the-freezer to make a batch of salsa.  Yay!  This is a very good thing, because we opened our second to last jar of salsa a couple of weeks ago.

In other roma tomato news, the blight has begun.  I think this is probably late blight. Because it's late in the season.  But I haven't taken the time to look it up.  Because honestly, who cares at this point?  It's here, it's affecting my tomatoes, and it's a race between blight and me to see who gets the best harvest.  Luckily for me, I have a secret weapon--that paper bag sitting on the counter with an apple (and a pear) in it.  I would say that I think I'm going to win this one, but I don't want to seem overconfident. 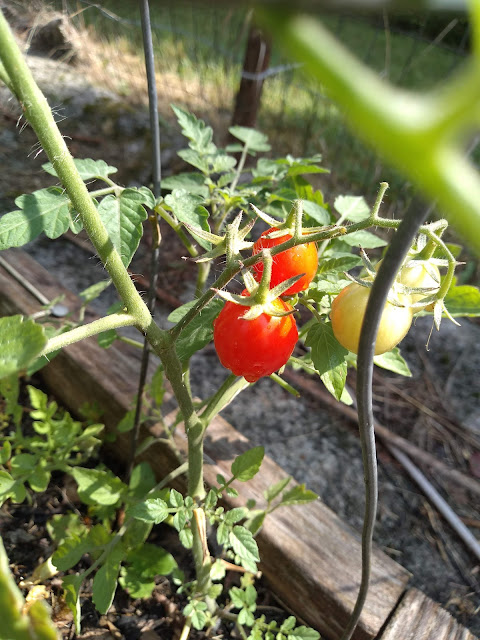 In other tomato news, the volunteer grape tomato plants--I've found five now--and the sun sweet cherry tomato sucker that I stuck in the ground earlier this year have set fruit are big enough that they require staking to avoid sprawling all over the ground like a teenager sprawling on the couch after a hard night of ... sleeping.  The volunteer plants are looking so much better than the on-purpose plants that I'm wondering how I can get all volunteer plants next year.  Maybe if I offer them a stipend?  The volunteers are extending the cherry tomato season, which is always a good thing.

So yeah.  Salsa is happening soon.  Stay tuned, my friends.