Well, that didn't go as planned.

I ended up not making salsa yesterday.

I mean, the whole point of cooking day was to make the salsa, and it didn't happen.

OK, so salsa wasn't the whole point, but it was the main point, and the impetus behind, cooking day.  If I hadn't planned to make salsa, I probably would not have planned to make all of the other stuff, either.

The reason I didn't make the salsa yesterday is because those tomatoes took so.darn.long to thaw.  In fact, I had them out on the counter all day yesterday, and in the fridge overnight, and they were still slightly frozen this morning.  Friends.  It is hot up in here.  I do not understand how those tomatoes managed to still be frozen after more than 24 hours out of the freezer.  Who knew tomatoes had such a low heat transfer coefficient?  Not me.

Anyway, I didn't make the salsa yesterday, but I did make almost everything else on the master cooking day list (still need to make the sausage gravy, which I didn't make yesterday because I didn't want to have to wash the pan by hand and there was no room in the dishwasher for it.  Wait.  Did that make sense?  Does it need to?), and I did the salsa this morning.

The core, score, freeze, thaw method of peeling tomatoes worked like a charm, although I will say that if you like chunky salsa, maybe don't freeze your tomatoes at any point in the process.  After thawing (sort of) and peeling, I felt like these particular tomatoes were more suited to sauce than salsa.  In fact, they were so mushy that I didn't even cut some of the smaller ones--I just tossed them in the pot.  But of course I used the mushy tomatoes anyway (I was committed at that point), and I will do it again, because it was so much easier than blanching and shocking, and who cares if the salsa is a little saucier than usual?  Not me.  And not anyone else around here, if they know what's good for them.

It actually worked out really nicely to have done all of the other chopping the day before.  All I had to do this morning was peel and dice (or mash) the tomatoes and mix them in to all of the other goodness.  It was less overwhelming and felt a lot more manageable.  So I might just repeat this same salsa process in the future. 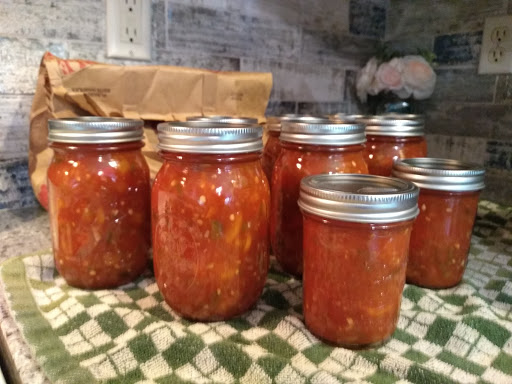 Who doesn't love the sound of canning lids pinging?  Tomato-ripening-bag in the background.

This morning, after I had filled the canner with 9 pints of salsa, I texted the oldest boy to ask for an estimate of his salsa consumption this year.  See, he's the one in our household who eats the most salsa.  And he doesn't even live here most of the year.  I was wondering if I should do another half batch or if this would be enough.  The boy responded with an estimate that was much higher than I anticipated (maybe he included his housemates in his estimate?  But I feel like they're not really voracious salsa eaters).  It was an estimate that made me wonder if I should have doubled the recipe right away (I have a big enough pot and enough tomatoes) and processed it in quarts.  There's a nationwide (maybe worldwide) shortage of canning lids, you know.  Perhaps the asking of that question was poorly timed.  Whoops.

I was ...not really hoping, more like dreaming... that I might actually have enough home grown tomatoes this year to make sauce.  I have never, ever even come close to such a thing.  In fact, last year I had to buy tomatoes just to have enough to make salsa.  For reference, the Ball Blue Book says it takes about 3 1/3 pounds of tomatoes to make a pint of sauce.  And 3 1/3 pounds of roma tomatoes is about 13-17 tomatoes.  For a pint!  And I thought I might have enough roma tomatoes to actually make sauce and for it to be enough sauce to make it worthwhile to can.  It's been a bumper crop of tomatoes this year, for sure.

There goes that dream.  More salsa, coming right(ish) up!

Posted by Scarlet Bluefield at 1:13 PM