Hello again, friends.  It's (past) time for another (perhaps the last of the year) garden update.

True to form, the garden descended into beautiful chaos by the end of August.  It's still pretty chaotic, but I pulled out most of the tomato plants, leaving some calming blank space. 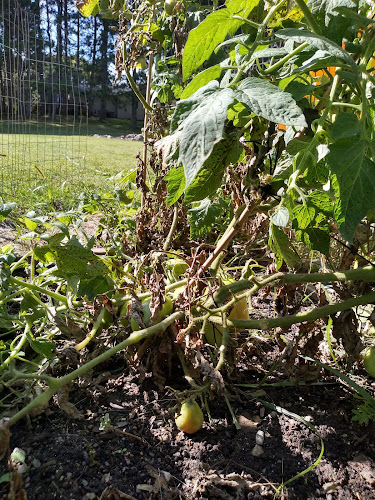 There's one blushing tomato between the two plants, and about 15 green ones.  I did top these plants to give them a better chance at vine ripening those existing green tomatoes. 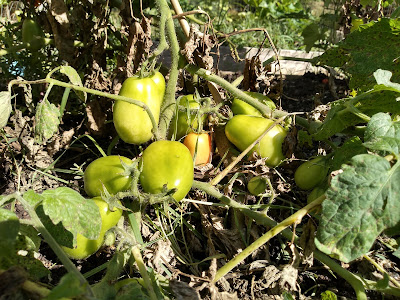 It's been a successful tomato year.  I canned two batches of salsa, and I have enough tomatoes, between the freezer, the tomato-ripening-bag-on-the-counter, and the green ones still on the vine, to make about 6-7 pints of sauce (depending, of course, on how many of those green ones ripen).  So exciting.

This is one of our biggest Sakata's sweet melons.  We've got  12-15 of them in various sizes across three plants.  I am crossing my fingers that at least one of them ripens before our first frost. 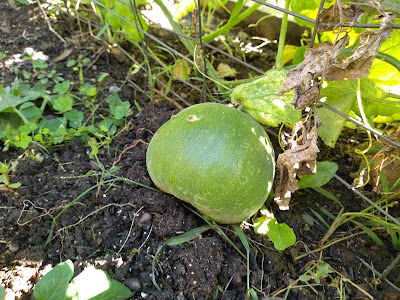 After I pulled out the rest of the sugar snap peas, the melon plants really took off.  I think next year I'm going to do an entire bed of just melons. 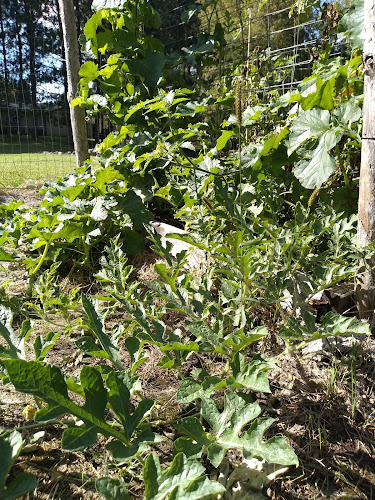 Here's the lone watermelon that's currently on the plant (there were two others that succumbed to slugs earlier in the season).  There are also a couple of female flowers, but there's pretty much no chance that any of those will ripen before frost.  This little guy probably won't make it, either.  But he's so beautiful, and he gives me hope that next year, if I give an entire bed over to melons, I'll be able to harvest at least one. 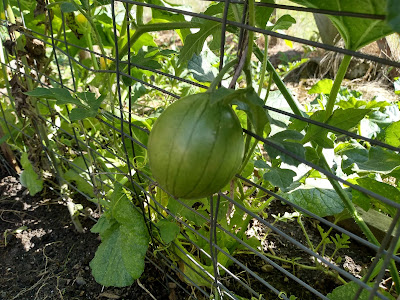 Here's what the corn is looking like these days.  What's that?  Looks like beans and zucchini, with a small tomato plant in the background?  Yeah.  That's because something took my corn out.  It's OK because the corn only grew to about 4 feet tall before tasseling, so we weren't going to get any edible corn anyway, but kind of a bummer because now the asparagus beans have nothing to climb up.  They're just sprawling over the ground, and since the mature beans look a lot like the stems, I just kind of gave up on harvesting them.  I'm thinking that in this bed next year I'll have sugar snap peas, plus anything random that I decide on a whim to grow. 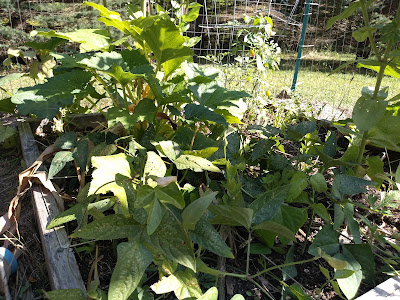 I think the zucchini is done.  I pulled one of the plants out, but have left the other three because they all have female flowers on them.  I don't think anything will come of them, but I might as well let them try.  It's not like it costs me anything. 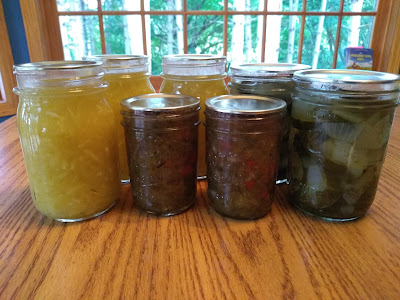 Speaking of zucchini, you may remember that a few weeks ago I had a zucchini issue.  Well, issue resolved.  I made three pints of pineapple zucchini (the texture and taste is just like crushed pineapple, and we do have a couple of recipes that call for crushed pineapple), two half pints of sweet zucchini relish (I don't like sweet relish, but I know at least two people who do), and two pints of zucchini dill pickles (yes, I finally found a recipe that did not call for sugar).  It was a little challenging keeping track of the three different recipes all at the same time so that I could put them all in the canner together, but I figured it out. 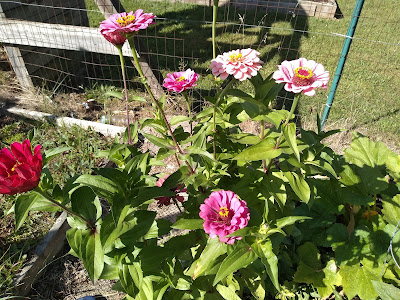 I am loving the zinnias again this year.  I planted all of my seeds in the spring, so I decided to save seeds from these for next year.  I also have a couple of marigolds in various spots around the property.  This one was buried under tomato plants until quite recently. 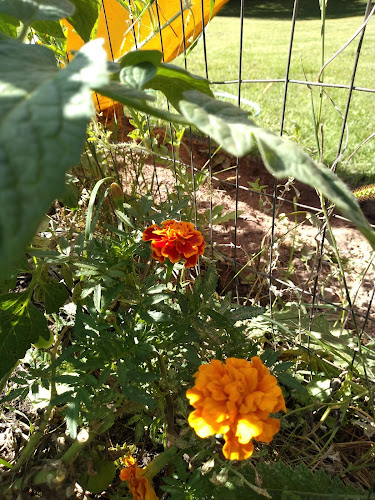 Let's see.  In other garden news, I've got 15 tiny radish plants growing.  Radishes are supposed to take about 4 weeks, but since it's cooler and the days are getting shorter, these will likely take longer.  They can take a light frost, and they're in a container, so I can bring them in if we're going to get a hard frost, so it's likely we'll have a few radishes to eat soon(ish).

The grape and cherry tomatoes are pretty much done, I think, but again, I'm leaving them in place just in case any stragglers want to ripen.  I harvested some basil the other day, but I think that's pretty much done growing, too.

The little green strawberry worms are back.  Ugh.  I'm 90% sure I'm going to just take out that bed in the spring, and either not grow strawberries anymore, or grow them in one of the other beds. We weren't getting a good harvest and those little green worms were so annoying to deal with.

And I think that's it.  How did your garden do this year?

Posted by Scarlet Bluefield at 4:00 AM