I made dirt (again)

OK, so I didn't actually make the dirt, but I did create conditions that were favorable for entropy to do its work.  And entropy made me some beautiful dirt. 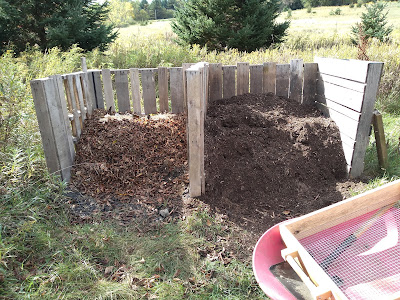 Earlier this summer, Hubby and the boys built a new compost bin for me.  I stopped adding to the bin on the right about a month ago, in anticipation of being able to harvest some compost for the garden this fall.  At the same time, I started a new pile on the left.  The pile is mostly chicken bedding and droppings along with our kitchen scraps.  This time of year, I'm adding fallen leaves as well. 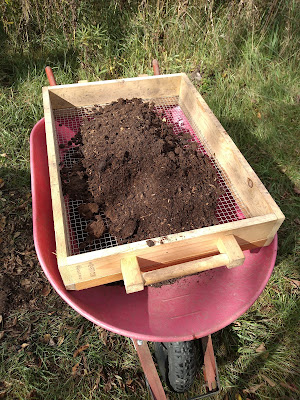 To harvest the compost, I throw a couple of shovels full from the pile into the compost screen.  The screen filters out the largest chunks and bits that are not yet decomposed, which I dump back into the new pile.  Upon giving the screen a good shake, the compost falls into the wheelbarrow.  Speaking of my wheelbarrow, isn't it lovely?  AKD found it on the side of the road this summer.  For free.  And it's pink!  It was meant to be. 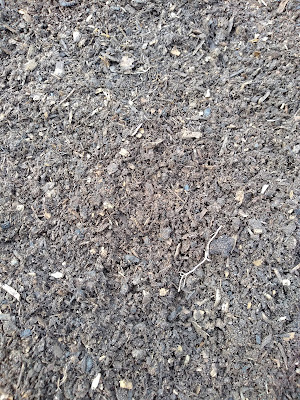 Look at that beautiful dirt!  I am just so tickled that time can take literal garbage, and turn it into something useful and nurturing.  It's so easy.  I don't even worry about ratios of brown and green components or moisture or temperature.  I do wish I had an easier way to turn the pile than shoveling it, but because I don't have an easier way to turn the pile, I don't worry about that, either.  I just pile it up and let it go.
I mean, you can see the inspirational life lesson in this, right?  Please say yes, because I don't have the energy right now to spell it out for you.  OK.  Twist my arm.  Here's the abbreviated version: pile up your metaphorical garbage and let it go.  Something beautiful will result.
This garbage-turned-dirt will nurture my family next summer by providing nutrients to the plants we will grow and eat.  This is recycling at its best, and it is so very satisfying. 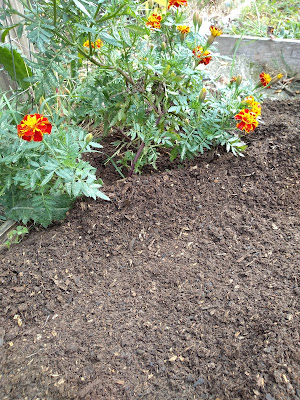 I'm always a little sad when I pull the plants out of the garden at the end of the season. There's so much hope and potential in a garden, and pulling out the remains of the plants feels sad.  But this year, it was a little easier, because I knew that after the plants were gone I would be adding some of that beautiful compost.  And I know that next year will be beautiful because I let this year's garbage go.
Posted by Scarlet Bluefield at 4:00 AM