Menu plan for the week of April 15

Hi friends.  Are y'all curious as to how we're doing with the Instant Pot? 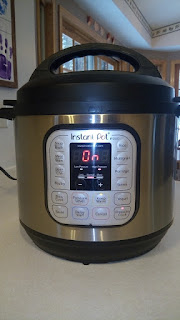 Well, so far I've done the "water test," made hard boiled eggs, Kraft mac-n-cheese (yes, from the blue box, because I could), and warm-me-up sausage quiche.

The hard boiled eggs took about the same amount of time as they would have had I steamed them on the stove, by the time the pot came to pressure, cooked, then released pressure, and were about as easy to peel, however 4 out of my 12 eggs cracked in the cooker.  They're still good to eat, but they don't look very good.

The Kraft mac-n-cheese also took about the same amount of time as it would have taken on the stove.  The noodles were a little softer than we're used to, so next time (if there is a next time), I would cook for a shorter time and do a shorter natural pressure release.  The one advantage was I only had one pot to clean, verses a pot and a colander.

The quiche was not a success.  I ended up baking it in the oven for 40 minutes after cooking it in the IP for 20.  This was definitely not a time or energy saver, as I usually bake that quiche for 40-45 minutes anyway.  In the Instant Pot's defense, I used a deeper dish than usual, and it was probably too full.  But I wanted to make the full recipe so it would be a fair comparison, and my regular dish doesn't fit in the Instant Pot.

If I had to decide right now, I think I would accept and use an Instant Pot if someone gave it to me, but I would not purchase an Instant Pot.  I am so very thankful to have the opportunity to try before buying, as I'm thinking I would have a serious case of buyers remorse if I purchased one.

Anyway, I have lots of Instant Pot recipes on the menu this week (and a few next week, too).  Maybe the Instant Pot will reveal its gloriousness to me yet.  Wish me luck!  I'll keep you posted.