Last week we continued our under the sea theme at Camp Scarlet with a field trip to see the IMAX film Under the Sea. 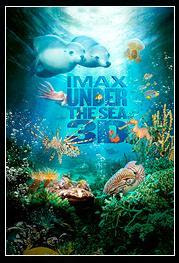 The film is set among coral reefs, so we decided to learn a little more about coral by reading Coral from the Underwater World series, by Deborah Coldiron.

We learned all sorts of interesting things that we hadn't known before, like that coral is an animal, not a plant, coral is related to jellyfish, and coral eats plankton.

Our next project was to grow some coral.  But growing real coral seemed too complicated, so I decided we should try making a salt crystal garden (which we thought looked a bit like coral), using table salt, water, and Mrs. Stewart's Bluing (click here for instructions).

Apparently, growing fake coral is too complicated, too, because nothing's happening.

This is actually attempt #2, after our gloppy first attempt ended with salt crystals forming everywhere but where they were supposed to be, and certainly not looking anything like coral...I'll let you know if anything grows.

Next we made an underwater scene.  The kids each fingerpainted a piece of white construction paper, covering it completely with 2 shades of blue paint.

Next, the kids sponge-painted (using a real sea sponge) coral along the bottom of the ocean (and a little bit floating around, as well :). 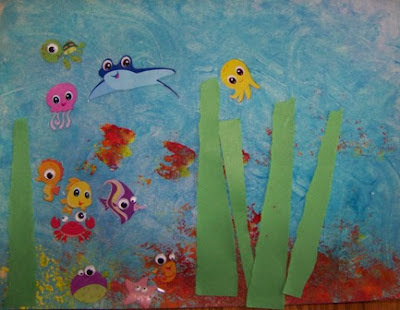 The next step was to tear some green construction paper into seaweed-ish (not Swedish) shapes, and glue it on.  The kids finished by applying cute sea-creature stickers to complete their underwater scenes.  As they were working, we discussed where in the ocean one might find each of the creatures.

And in case you were wondering, the children wore me down--we added water to their under the sea sensory bin last week. 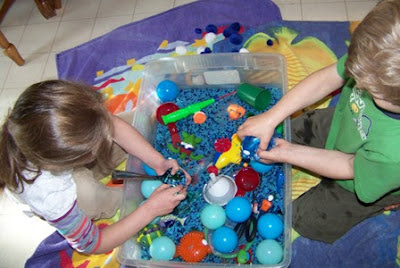 Posted by Scarlet Bluefield at 2:46 PM

Email ThisBlogThis!Share to TwitterShare to FacebookShare to Pinterest
Labels: Under the Sea