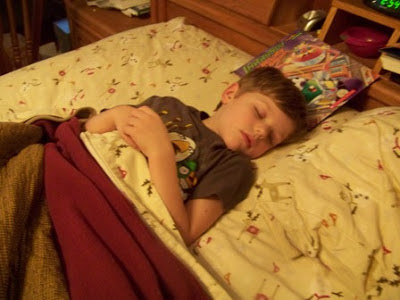 We are in an in between time, Bubby and I.  It seems like we've been here forever...and it's true, we have been here an extraordinarily long time: two years or more.  I refer to that time in between napping and not napping--the gray area where if he takes a nap during the day, he won't be able to fall asleep at a reasonable time in the evening, but if he doesn't take a nap during the day, he is completely irrational and inconsolable from about 4 p.m. on.

It isn't like this every day.  Some days, he's OK without a nap, but we can never tell which kind of day it will be until it's too late to intervene.

What's a mama to do?  It's an impossible choice--there are no winners here.

This in between time is new for me.  With my oldest two the transition from nap to no nap was accomplished quickly, with little angst, on their part at least.  Their mama wasn't quite as ready as they were to give up nap time.

I know this in between time will pass--phases like these always do--but right now?  It is rough going.  My patience, worn thin by more than 12 years of children rubbing up against it all day, every day, has gone the way of the Ivory-Billed Woodpecker, a north American bird so endangered it may already be extinct.  I would say I'm not sure how much more of this I can take, but in reality, I know we'll endure for how ever much longer we need to.  But it won't be pretty.

How about you?  Are you in an in between time?  How do you cope?

I've shared this post with the Parent 'Hood.  Come on over and join us.
Posted by Scarlet Bluefield at 9:30 AM