AKD is getting close to the end of his 12 weeks of Spanish instruction, and the other day they had a fiesta.  Remember that?  On party days in foreign language class, you were supposed to bring in a food to share from that country?  Only back then it was in 9th or 10th grade that we were taking our first year of a foreign language.

Anyway, he mentioned briefly, on Friday, I think it was, his desire to bring some of our homemade salsa and homemade tortilla chips to school for the fiesta.  I was kind of surprised that he wanted to bring salsa, considering that it's very spicy, and he doesn't like it, but I was willing to let him have some.  On Monday, he mentioned it again, this time saying, I need it tomorrow, mom.

Uh, son, if you need it tomorrow, you're plum outta luck, because you needed to do more than just mention it if you wanted me to actually buy some tortillas for you to make into chips.

Faced with my unwillingness to go out right then and buy tortillas, and his own unwillingness to make tortillas from scratch, AKD went to plan B, which was to search for Spanish desserts online that are both easy to make and for which we already had all the ingredients.

Here is what he found, and oh my, they are so simple to make and so delicious.  Well, I mean, what's not to like about butter and sugar and cinnamon, all baked up in a tasty flaky nugget of Spanish goodness? 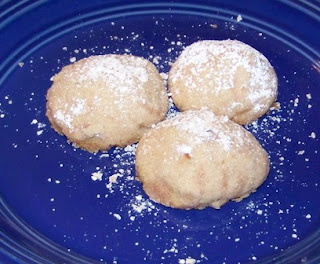 A Mexican-style cookie rolled in cinnamon sugar
(from allrecipes.com)

Posted by Scarlet Bluefield at 9:30 AM