It was the day after Thanksgiving when we started seeing the first of the carcasses riding home on top of cars and in pick-up beds--a sure sign that hunting season had begun.  Oh, I'm not talking about deer hunting season, although that was going on, too.  I'm talking about tree hunting season.  It's kind of a lame joke, but since the two hunting seasons happen around the same time, Hubby and I will always say, "they bagged one--it's a thousand pointer!" or similar nonsense when we see trees strapped to vehicle roofs.  You have to admit, tree hunting is a whole lot easier than the other kind of hunting.

So, since everyone was doing it (and because it's our tradition), we packed up the boys to hunt for our own tree.  And this is what happened. 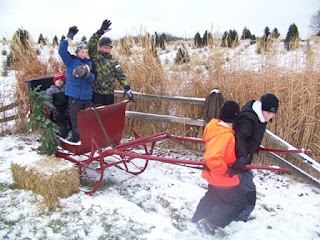 Posted by Scarlet Bluefield at 9:25 AM