Let me begin by saying that I am still just as adamant that I need a Cricut as I have been forever the past couple of weeks.  I've had a couple of Cricut fails in the past week, though, so I'm feeling a little frustrated.  Mostly because I can't just re-cut and retry right away.  Which will be solved by the acquisition of a Cricut machine.

So I put the decal on the sign I'm making for a friend, and it looked so good!  I loved it.  I mean, I love, loved it.  And then I tried to seal it.  And now I think I might know why I never see anyone sealing their vinyl signs.  They seal the stenciled signs, at least the ones that are going outside, but not the vinyl signs.

The vinyl started peeling up pretty much as soon as I applied the sealer.

I tried to fix it, by putting a cover sheet on it and burnishing, and it would have worked, except some of the lines were narrow and they curled and it was very sticky at that point and I couldn't uncurl them.  So I tore it all off.  And I haven't gotten to the library to re-cut the vinyl yet.  Because it is a pain in the tuchas to go to the library, check out the machine, find out which space in the library is available for me to use it, transport it to said space, set up the machine, set up my laptop, set up my mobile hot spot (because for some reason, one cannot use design space over the library's wifi network, but one can over my hot spot), and then cut.  And then reverse the steps when the cutting is done.

So I decided to move on to my next next project.  Hubby cut the board for me, and I painted it white, then added a faux shiplap detail and applied the stencil. 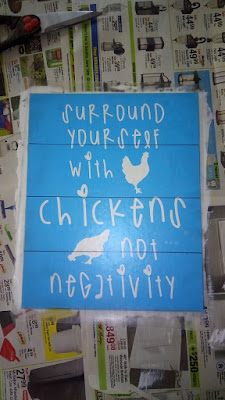 All was well, and I started painting.  So far, so good. 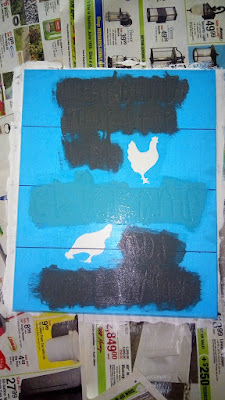 But then when I pulled the stencil off, not only did it also pull off about half of my letters (and all of my chickens)--it also pulled off much of the base paint.  I don't know why the base paint would come up.  I have definitely seen people apply stencils to painted surfaces and remove them cleanly.  This board is MDF, so that might have made the difference--it's easier to pull up particles than it is to pull up solid wood.  I also did not allow the paint to dry for very long, so that might have been a factor.

As for the letters, I think it's the paint (in addition to the fact that the base paint wasn't sticking very well).  I used the same paint for my next project, and I had the same issue with the letters peeling up and stretching when I pulled that stencil off.  I love the color, but I'm going to have to use something else, because it is so disheartening to see those letters peel up with the stencil.

Moving on (because heartbreak after heartbreak is not a happy topic).

I was really reluctant to get started on my next project, because I was afraid something would go wrong, and this was a higher stakes project.  At least it felt that way.  My next project is a 25x18 inch wooden pallet sign that will be displayed in our living room.  I wanted it to look good, and I needed something to go right.

So Hubby put the sign together for me and I sanded it, and sanded it, and sanded some more, and then sanded again, for good measure.  Then I just stared at it for a couple of days before finally staining it with two coats of probably-older-than-our-marriage walnut stain.  And then I stared at it again for a couple of days.  And then, I plucked up my courage and went for it.

I love, love, love how it turned out (I still need to seal it, which will make the words stand out more)!  It's got a few imperfections, but you can't really tell unless you know what to look for.  That darn gray paint wanted to peel up again. 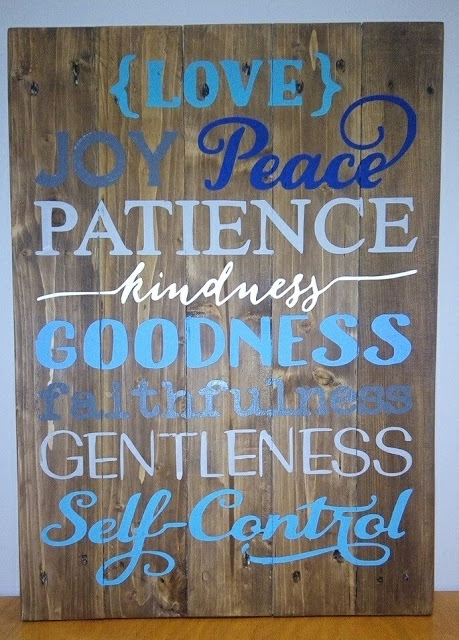 So what's next for me and the Cricut machine?  Well, I'm hoping to get to the library this afternoon, where I will re-cut the vinyl for the sign and the stencil for the chicken sign.  I'm also going to cut a vinyl B and another vinyl design that will be part of our new gallery wall. 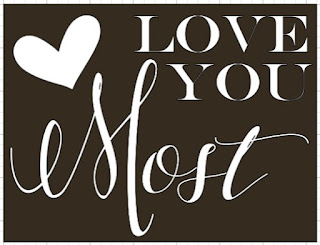 In the meantime, I am crossing my fingers that there will be some great Cricut deals in July.