Friends, I was hoping to get a garden update to y'all this week, with fresh pictures, but it's been raining.  A lot.  So you're getting week-old pictures of some things, and no pictures at all of others.  This could be the last garden update for this summer, because the only things still growing are the pole beans and the lemon cucumbers. 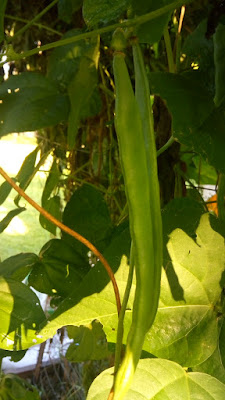 Remember how I said I wanted to have enough pole beans to make canning them worthwhile?  Well, I got enough, and then some.  I already have 24 pints canned, with another pint in the freezer, and I just picked enough yesterday for at least another 5 pints, plus I canned 2 pints of dilly beans.  And they're still coming.  Whatever creature decided to kill about half of my bean plants was, it turns out, an angel sent from heaven, because if all of those beans had been allowed to live...well, I'm just glad I didn't find out what would have happened. 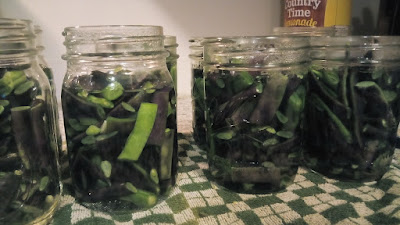 When I canned the dilly beans, I also made pickles from my lemon cucumbers.  Y'all, I still don't know how to tell when those things are ripe, but I do know they taste pretty good.  And I also know there are more of those coming, too. 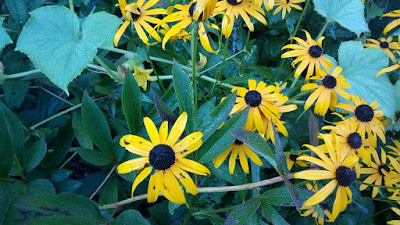 The lemon cucumbers made themselves comfortable among the black-eyed susans.

Friends.  I had exactly the right amount of brine for the pickles and dilly beans.  I mean exactly.  I used every drop, and it's a good thing, too, because I discovered after I started cutting everything and preparing jars, that I didn't have any more vinegar.

OK, it's not exactly true that the beans and cukes are the only things still growing in the garden.  The flowers are also still producing.  I am loving cutting zinnias to bring inside. 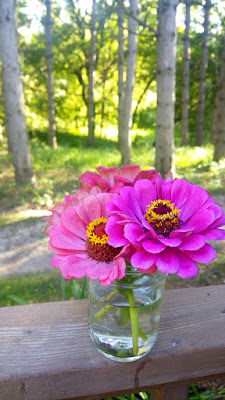 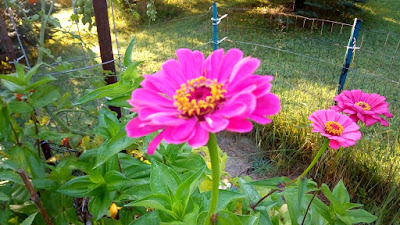 They're so pretty.  The marigolds and nasturtiums are still going strong, too.

All of the sunflower plants are taller than me  now, and one of them is almost taller than the coop.  We have a mix of these burgundy blooms, along with yellow.  Seeing those sunflowers makes me happy. 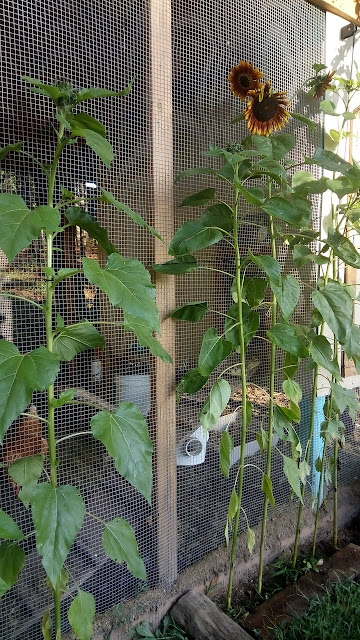 Toasty and Koko photobombing.  (Remember, this pic is from a week or so ago, back when it was sunny--the plants are taller and more blooms are open now)

I pulled out the zucchini and patty pan squash because they were straggly and sad and done.  I got one last patty pan and one last zucchini (but then I set the zucchini down by the chicken coop and forgot to pick it up again.  I saw the last little pecked bit of it this morning.  Whoops). 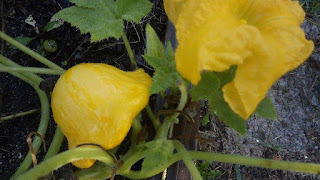 The watermelon has given up, but I haven't had the heart to pull it out yet, poor thing.  Next year, there will be watermelons.  Maybe.

I pulled enough ripe tomatoes off the vines to make a batch of salsa (plus tacos and BLTs), then I topped the plants, and left them out to see if any of the unripe tomatoes will ripen on the vine. 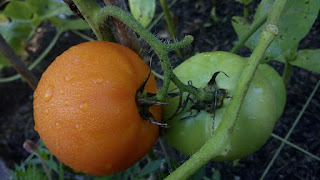 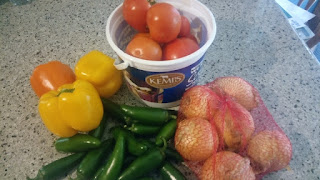 The tomato plants are looking pretty sad, too, but it doesn't take any extra effort on my part to just leave them to do their thing, so why not?

In other news, I pulled this beauty out of a box of jars Beav-erly gave me a few years ago, from her mom.  It's a tall, skinny pint jar, and they don't make 'em like this anymore. 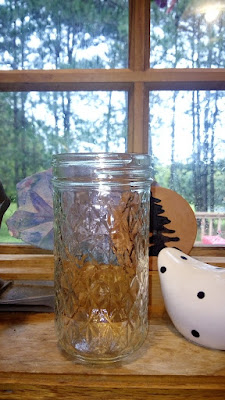 I squealed when I saw it, because it's a beauty, and you all know how I feel about jars.

Unfortunately, I discovered it because I am out of pint jars.  Completely.  This one was at the bottom of the stack.  Which is unfortunate, because I still have all of those beans that I picked yesterday, and all of those beans that are still out there waiting to be picked.  Have y'all ever grown beans?  They mature so fast.  I mean, I picked them clean, and I bet if I go out again 2 days from now I'll be able to pick another ice cream bucket-full.  Crazy prolific.  If you haven't had much luck with beans, try pole beans.

And then there's the apples.  They're small this year, and we don't have very many (darn acrobatic deer), but I bet they're close to ripe.  I still have some half pint jars, so I can definitely get some caramel apple jam done.

And...I think that's it.  Let me know if I forgot anything.
Posted by Scarlet Bluefield at 4:30 AM