How to have fun fostering creativity in your little one

So I saw this cute thing someone out there in blog-land did with her monster cookies.  You know what monster cookies, are, right?  They are cookies, and they contain all kinds of yummy goodies, like oatmeal, peanut butter, chocolate chips, m&ms.  There are tons of different recipes out there, but the unifying factor seems to be that they all contain lots of different fun mix-ins.  My hypothesis is that they're called monster cookies because they have a monster of an ingredient list.  Or because monsters will eat anything and everything, and that's pretty much what's in these cookies.

Anyway, Amy, the author of The Idea Room, added wilton candy eyes to her monster cookies.  Isn't that a fun idea?  Now her monster cookies actually look a bit like monsters.  Click here to see.  It's so easy to do, but makes a batch of homemade cookies just a little bit more special.

I wanted to make them.  I mean, they're so cute, right?  So I mentioned them to Roger when I picked him up from school.  "Wouldn't it be fun to make some monster cookies with candy eyeballs?" I asked him.

He liked the idea, but thought it would be better to make m&m cookies.  And he knew we weren't allowed to use the candy eyes that I had purchased for another project (I was willing to make an exception, but he was adamant that we needed to save them), so he said we should use m&ms for the eyes.  Or chocolate chips.  He wasn't sure which.  And, by the way, we should make them spiders instead of monsters, because spiders have 8 legs.

Um, what?  What happened to my cute monster cookie idea?  You know, the one that really wasn't my idea at all? 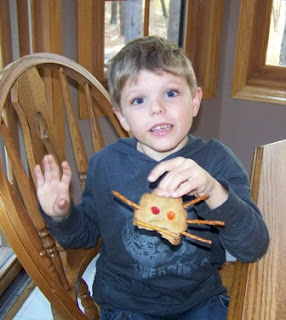 But I went with it, and we had the best time making spider cookies, which leads me to the subject of this post: how to have fun being creative with your little one. 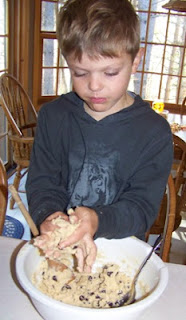 1.  Have an idea in mind. Many little ones, including my own, are completely intimidated if you just get out some craft supplies and tell them to have at it. So, have an idea in mind, and present it to your child. 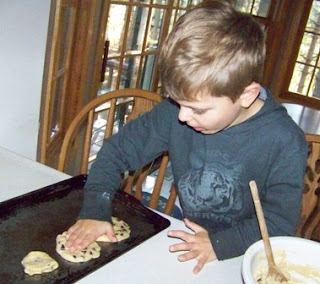 2.  Let go of preconceived notions. It's important to have an idea in mind, but don't get too attached to it, because if your kids are going to be creative, they're going to add their own little touches to the project. Or even go an entirely different direction. Let them. Go with them. 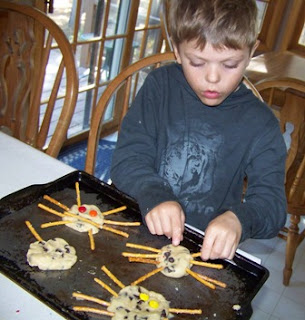 3.  Stand back and let the creative process happen. This is not your project, it's theirs...so let it be theirs. Support them, offer suggestions if they get stuck, brainstorm with them, but let it be theirs. If you need to control how a project turns out, make your own. 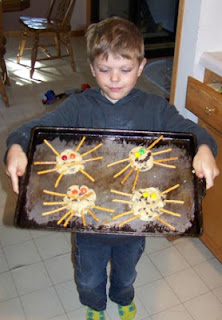 4.  On that same note, let the kids do it. Sure, you could do it faster, neater, and cuter (and, therefore, more "pin"able), but that's not the point, is it? Let the kids do every.single.thing that they can. Let them measure the sugar, crack the egg (even when it ends up on the counter instead of in the bowl), cut out the wings, glue on the eyes...whatever it is that needs to be done, let them do it, so that they learn that they can. Let them know you're available to help, but only help when your help is requested. 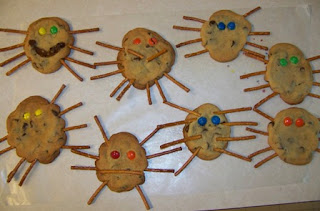 5.  Have fun!  That's what it's all about right?  This is sooooo not about the finished product, but about the process of creating. 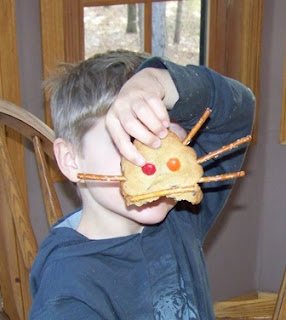 The family loved the spider cookies Roger made for them.  And Roger loved that he made them himself.  You know that feeling of pride and self-confidence you get when you do something yourself, even if it's not perfect?  That's what I want for my kids, not a bunch of pretty, but rehashed, already-been-done, uninspired projects that are more mine than theirs.  That's worth so much more than having things done my way.  I'll make some monster cookies with eyes another time :)

Ooops.  I meant to schedule this to be posted October 16, which is tomorrow, but clicked October 9 instead!  Ever have days like that?

Oh, and I'm sharing this post with the Parent 'Hood--come on over and join us :)
Posted by Scarlet Bluefield at 9:00 AM