I made bagels yesterday.  I know, I know, they weren't on the list, but when the inspiration strikes, I just gotta bake.  Does it make you feel any better to know that I also made granola and granola bars yesterday, which were on the list?

A few days ago, MC discovered that we had cinnamon raisin bagels.  Apparently, he didn't know, and it's my fault for not telling him.  Silly me.  I thought he could tell that we had bagels by the presence of bagels in our kitchen.  Concurrent with MC's discovery of the bagels was Bubby's discovery of the bagels.  But Bubby doesn't like raisins, so he wondered why I never buy bagels that are just plain cinnamon.

So that's why I decided to make cinnamon swirl bagels yesterday.

Bagels are actually pretty easy to make, and just a little more time consuming than regular bread.  It does make me wonder why someone decided it would be a good idea to boil this particular bread before baking it.  Was it a happy accident?  The bagels fell into a pot of boiling water, and the baker decided to go ahead and bake them anyway?  Or was it a planned occurrence?  And if it was planned, why would they think to do such a thing?

In any case, they're easy to make--don't let the extra step intimidate you--and they taste good, too (better than store-bought, according to independent taster AKD).  And, of course, there's the added benefit of no preservatives or unpronounceable ingredients, and the price can't be beat.

I used this recipe from A Kitchen Addiction, with a few modifications*.  The addition of cinnamon to the dough made it smell heavenly as I was kneading, and the cinnamon sugar adds a dash of sweetness swirled throughout. 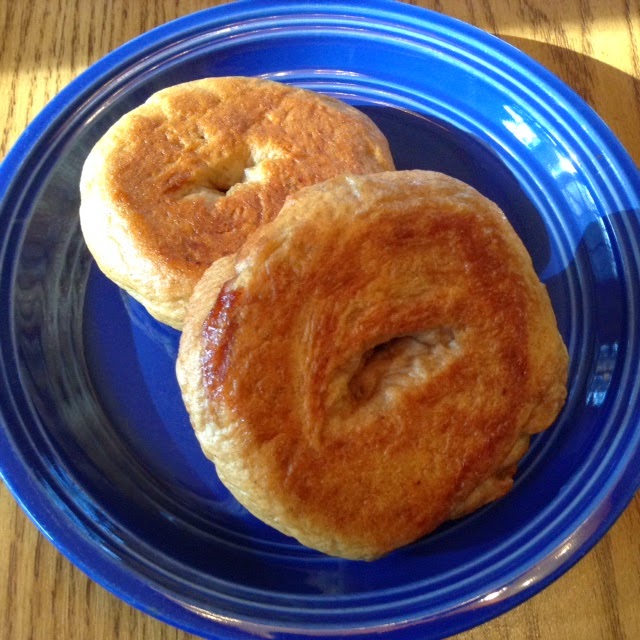 The children have already eaten the best looking ones, but these taste just as good!

Your turn: have you ever made bagels?  How'd they turn out?

Posted by Scarlet Bluefield at 8:36 AM