Ladies and Gentlemen, We Have Sap 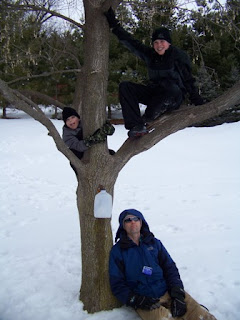 As I mentioned the other day, we've tapped 4 of our Boxelder trees hoping to get enough sap to make syrup.  Conditions are perfect for sap in our neck of the woods right now, with temperatures rising above freezing during the day, and dropping below freezing at night. 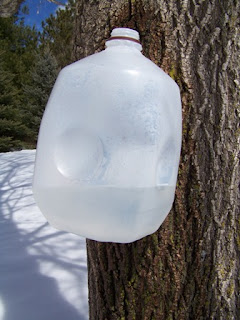 Two days after placing the taps, we've collected almost a gallon of sap from two trees.  A third has sap flowing, but the collector (aka milk carton) keeps blowing off the spile (aka ball-point pen shaft).  All three of these trees are experiencing quite a bit of leakage around the spile because they're not tight in the holes, so the potential is there for much more sap to be collected (if you look back at that first picture, you'll see the sap leakage on the tree trunk).  The fourth tap doesn't seem to have anything happening--we'll be moving that one soon. 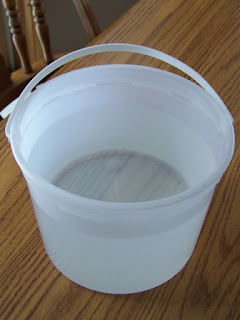 This is the sap.  Yes, I know it looks like water.  That's because it mostly is water. With a sugar concentration of just 2% or less, we estimate it'll take between 5 and 8 gallons of sap to yield 1 pint of syrup.  That's between 80 and 128 cups of sap to make 2 cups of syrup. 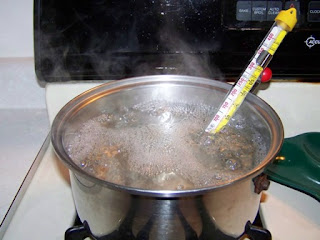 The next step is to concentrate the sap into syrup by evaporating off most of the water.  Just look at all that steam--that's what we like to see!  We started boiling, and that almost a gallon of sap is now, oh, around 1 cup of more concentrated sap.  Much sweeter, but still not anywhere near where we'd like it to be in the end.  We'll keep collecting and boiling as we go.

Is it worth it, you ask?   Especially considering you don't even like maple syrup, Scarlet, is it worth all the fuss?

My answer is absolutely yes. This experiment in syruping has already been so much fun and so educational. Can't wait to see how it turns out!

If you'd like more information, University of Cincinnati Clermont College has a terrific one page explanation of how to tap trees to make syrup.
Posted by Scarlet Bluefield at 10:00 AM

Email ThisBlogThis!Share to TwitterShare to FacebookShare to Pinterest
Labels: syrup