The garden is looking a little sad these days.  The nights are cooler and the plants are dying.  It's all as it should be, though, the circle of life...

I still have honeydew melons and zucchini growing, and I'll leave them out there as long as I can.  The gnawed-upon honeydew suddenly started growing again, and developed a new crack, maybe because of the 5 inches of rain we got in about 12 hours last week?  So I'm not sure what to say about that.  I think I might be picking that one soon.  There are also two watermelons and two baby pumpkins that I'm doubtful will make it to maturity (but maybe--as long as they're alive, there's hope.  There's a lesson in that somewhere...)

I successfully canned the pumpkin last week, and I think we have about a 3 or 4 year supply of pumpkin over here.  Which is good, 'cause I think the boys want to grow jack-o-lantern pumpkins next year. 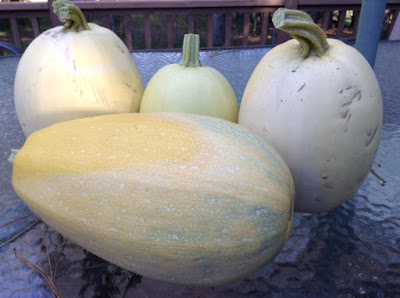 My helpers and I harvested spaghetti squash earlier this week, and I'll be dealing with it early next week. Hopefully.

That's it for now.
Posted by Scarlet Bluefield at 7:30 AM