It's blight.  My tomatoes had blight, and the plants were unsalvageable.  If I had known what it was sooner, I might have been able to save them.  If they had been better supported, it might not have spread so quickly.  So disappointed.

I picked all the tomatoes, kept the unaffected ones to ripen on the counter, and threw the rest into the field behind our house.  Maybe there will be wild tomatoes growing out there next year.  I pulled out the plants and put them on the burn pile.  So that's it for us for tomatoes this year.  I managed to get 9 pints of salsa and 2 pints of diced tomatoes, plus I think I have about enough for another 3 quarts.  If they ripen.  Disappointing.

On the bright side, now that the tomatoes are gone, the zucchini has more room to grow.  My scrawny little plant actually has two fruits on it right now.  At one time!  Whew hoo!  We are super-producing, now. 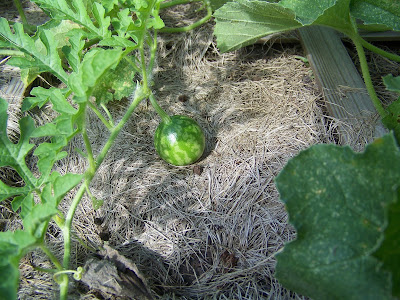 I have 2 watermelons that are about the size of golf balls.  They are, quite frankly, gorgeous.  They look like dinosaur eggs.  As much as I hate warm weather, I'm praying for an extended summer this year so these cuties can mature.

I have 3 honeydews that look like they might make it to maturity, including the scarred one that was gnawed upon.

By far the best producers in the garden this year have been the pumpkins and spaghetti squash.  We have 6 of each, many of which are close to ripe.  I'm planning to can the pumpkin (well, after I make a pie or two), and freezing the spaghetti squash.  I found a method that I think might work better than my cook-it-then-freeze-in-one-cup-portions method.  Squash has too much water in it to freeze without removing some of the water.  I'll let you know how it turns out.

I'm continuing to get pickling cucumbers, one at a time. I made some refrigerator pickles, but no one likes them, because they don't taste like pickles from the store.  Yes, my beautiful family, that's because they're fresh.  Oh well.  I decided not to do pickles next year.  Maybe I'll try again at some point in the future.

I also decided not to do green beans next year. My family doesn't really like the taste of fresh beans, I don't like the texture (they're hairy! Ugh!), and forcing the issue just doesn't seem worth it.

So what am I growing next year?  Tomatoes, zucchini, melons, and pumpkins, and possibly broccoli or Brussels sprouts.  That might be it.  Oh, and strawberries, if we can find a spot to put another bed.

What's growing at your house?
Posted by Scarlet Bluefield at 7:00 AM